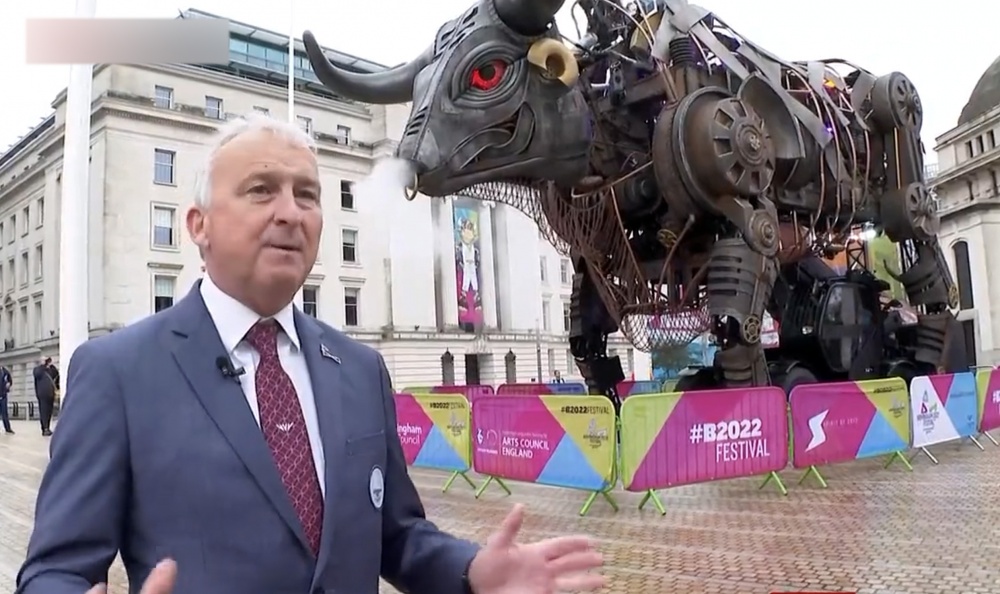 Plans to dismantle the stunning bull and send it to the scrapyard after the end of the games could be halted if the council can find a way to retain the iconic structure, it has been revealed.

Cllr Ward, leader of Birmingham City Council, has responded to public calls to save the popular Birmingham 2022 bull from being dismantled and disposed of.

An online petition has also been launched to try and save the work of art from becoming landfill after creators of the bull announced they would “dismantle” it once the Games has ended.

People are clamouring for the bold work of art, which celebrates Birmingham’s industrial heritage, to be saved as a public attraction.

However, despite its popularity at the opening ceremony, and being a major draw for selfie-seeking visitors to the site of the bull’s current display site in Centenary Square, the show-stopping structure – a symbol of the city’s strength and endurance – will be taken apart and scrapped once the Commonwealth Games come to a close.

There are currently no plans in place to store away the bull once its dismantled on 9 August, after the Commonwealth Games 2022 closing ceremony.

Mike Kelt, director of Artem, the company who built the moving sculpture, said: “There’s bits in it that have to be taken out, so if it was going to exist forever, somebody would have to pay for those bits to stay in it.

“That isn’t an enormous sum of money, but I think storage is the problem.

“And to move it somewhere is also a problem. It takes quite a bit of effort to move it. And being 10 metres high, there aren’t many places you can move it.”

BBC The fiery raging bull, breathing out steam, proved to be a major highlight of the Commonwealth Games 2022 opening ceremony in Birmingham.

Following the public outcry, Cllr Ward weighed into the debate, issuing a statement saying: “I am delighted with how well the Opening Ceremony bull has been received by the people of Birmingham and beyond.

“The council is in discussion with partners to see what is possible for the future, after the bull has spent 10 days in its temporary home in Centenary Square.

“I would encourage people to go and see what is a magnificent spectacle.”

Posing next to the bull in Centenary Square, Cllr Ward released an additional video message.

“I’m here next to the bull, the iconic symbol of the opening ceremony of Birmingham’s Commonwealth Games.

“I’m delighted the people of Birmingham are keen to retain this piece of artwork.

“Albeit that might prove a little bit tricky as its not meant to be on permanent display.

“What I would really like to know from the people of Birmingham is what would you like to see it called.”

Dr Justin Varney, director of Public Health, was one of the senior officials at Birmingham City Council to join the #SaveTheBull campaign.

“The bull is spectacular but even more so with its story of slave labour and women chain makers,” he said.

“It is both triumphant but also challenges us.”

Since its arrival in its current display position in Centenary Square, next to The Hall of Memory, the bull has been thronged by hungry fans seeking selfies with the gigantic sculpture.

It followed an outpouring of support on social media for keeping the bull in some form as a permanent tribute to the Birmingham 2022 Commonwealth Games.

The bull also has a witty unofficial Twitter account, which has garnered hundreds of followers within hours of going live and in which the artwork pleads that it “wants to live in the city”.