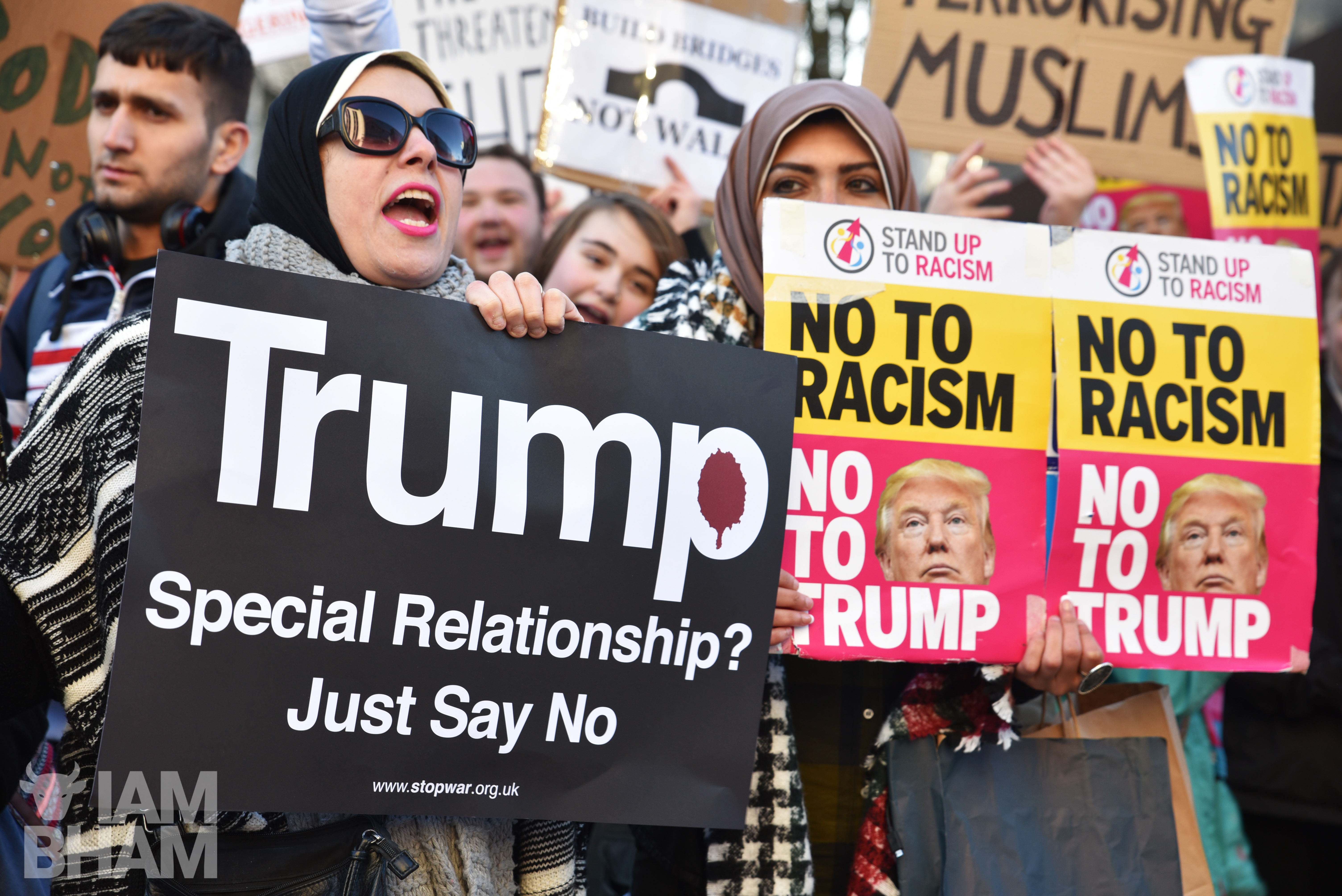 A public meeting calling for Donald Trump’s UK state visit to be cancelled is to take place in Birmingham next month.

Expected to be attended by high profile activists, organisers of the event are demanding that the US President’s invitation to an audience with the British royal family be revoked.

Despite an official Government petition calling for the 45th President of the United States not to meet the Queen passing one million signatures and resulting in a Parliamentary debate last year, Downing Street insists the visit will still go ahead.

The planned gathering in Birmingham, organised by the Stop the War Coalition, aims to challenge the visit in the same week the President is expected to arrive in the country.

International outrage over Donald Trump’s impending British excursion has arisen following his frequent attacks on minority groups including the Muslim and Hispanic community, women and the disabled; and his failure to effectively condemn fascist white supremacist groups since assuming office in January last year.

Responding to the 1,863,708-strong petition, which wad closed early on account of the General Election, the Foreign and Commonwealth states:

“HM Government believes the President of the United States should be extended the full courtesy of a State Visit. We look forward to welcoming President Trump once dates and arrangements are finalised.

“HM Government recognises the strong views expressed by the many signatories of this petition, but does not support this petition.

Donald J. Trump will be the third US president since 1952, after Barack Obama and George W Bush, to be invited to enjoy the pomp and ceremony that comes with such an exclusive invitation by the Queen.

The decision by Prime Minister Theresa May to have initially afforded Trump such a visit only a week into his presidency has been described by veteran Labour MP Paul Flynn as “extraordinary” and “completely unprecedented”.

What if Donald Trump’s visit moves to Birmingham?

Following news last year that the US President’s visit could be moved to Birmingham, Hodge Hill MP Liam Byrne instigated an additional petition, which gained over 3,000 signatures.

Re-introducing the petition, Byrne stated: “Last spring, it was rumoured that Donald Trump’s UK visit would be moved to the Midlands and Birmingham. In light of Trump’s recent Islamophobic tweets, in which he shares the propaganda of far-right, racist party ‘Britain First’, it’s all the more important that Trump not be given an invitation to Birmingham.”

Originally speaking to the BBC about Trump possibly visiting the Midlands, Byrne explained: “I think the result of him coming to Birmingham would be very divisive. We would land up with a whopping great security bill that the West Midlands Police would have to pick up.

“I think right now, what we really need is a bit of unity in the community rather than people coming in and trying to divide us.”

In the weeks after Donald Trump’s inauguration last January, four large protests were held in Birmingham against the Republican head of state. Coinciding with similar demonstrations across the country and the world, many protesters have been angered by Trump’s rhetoric and policies targeting minority groups.

This has included Trump describing Mexicans as “drug dealers, criminals, rapists”; and the signing of an executive order in 2017, banning travel to the US from seven predominantly Muslim nations.

The POTUS has additionally enraged environmentalists by dismissing the threat of climate change.

When is Donald Trump visiting Britain?

New dates for US President Trump’s visit are scheduled for February 26 and 27, according to PM Theresa May’s diary, as reported by The Times. Exact details of the visit, including locations Trump may be escorted to, are being kept tightly under wraps by Government officials.

However, activists have insisted they will follow and protest Trump, regardless of which city he tours. Lindsey German from Stand Up to Trump, A broad coalition of 28 groups, said it would be the largest protest the country had seen since 2003.

Joining her in their support for mass demonstrations in the UK are peace activist Salma Yaqoob, MP Shabana Mahmood and Guardian journalist Owen Jones, who helped form the Stop Trump Coalition.

Hundreds of personalities from the worlds of politics, sport, music, entertainment and film have also pledged their support towards action challenging the US Head of State. These include musicians Brian Eno, Akala, Dave Randall and Paloma Faith, comedians Frankie Boyle, Meera Syal and Shappi Khorsandi, YouTuber Dan Howell, and journalists Gary Younge and Paul Mason.

Stop the War Coalition patron Salma Yaqoob, 46, said: “If Donald Trump comes to any of our great cities, our diverse communities will take to the streets in our thousands – and show him what we think about his misogyny, racism, and Islamophobia.”

A main national protest in London has been scheduled for the provisional dates that are currently in place.

Who will be speaking at the Birmingham public meeting?

Moazzam Begg was born in Birmingham to secular Muslim parents. After his mother died when he was six,
his father sent him to the Jewish King David School in Kings Heath, “because he thought it inculcated
good values”.  As a young adult, in the early 90s, between his job and studying law, Moazzam spent time working in Bosnia as part of the relief effort.

In 2002, he was one of nine British citizens who were held at Camp X-Ray, Guantánamo Bay, by the
US government. Begg was labelled an ‘enemy combatant’, imprisoned for an undetermined crime he wasn’t guilty of and then released without charge in 2005 on orders of President George W. Bush, despite Pentagon, CIA, and FBI objections.

After his release, Begg became a media commentator on issues pertaining to US, UK and international anti-terror measures. He toured as a speaker about Guantanamo and other detention facilities. Begg co-authored a book, and has written newspaper and magazine articles.

He is currently outreach director for the prisoner human rights organisation CAGE, appearing extensively both in the media in the UK and internationally, lecturing on issues surrounding imprisonment without trial, torture, anti-terror legislation and community relations.

Lowkey, real name Kareem Dennis, is a British-Iraqi hip hop artist from London. Beginning his musical journey as a teenager, Lowkey’s socio-political tracks have been featured on BBC Radio while he has performed at the BBC Electric Proms, Glastonbury, T In The Park and Oxegen.

He has been a prominent member of the Stop The War Coalition and has spoken against the invasion of Iraq, and been a sharp critic of United States and British foreign policy, claiming that the two powers are only interested in supporting leaders who are under their influence or are willing to assist them.

Lowkey witnessed the Grenfell Tower fire disaster in June last year, which resulted in the death of more than 80 people. He criticised the British government and mainstream media in the wake of the disaster; and felt the tragic event was a result of the injustice and criminality at the heart of Britain’s current political system. He subsequently made a tribute song titled Ghosts of Grenfell in honour of the victims and was later hailed in Parliament as “poet laureate” for Grenfell Tower by MP Emma Dent Coad.

Brummie Saffiyah Khan became an international icon after being photographed staring down an English Defence League thug during a demonstration in Birmingham city centre in April last year, a picture that quickly went viral, being featured in news stories around the world and being reproduced by international artists.

Saffiyah Khan has since continued to pursue her social and political activism, supporting and speaking at events with Labour leader Jeremy Corbyn, appearing on TV shows including The Last Leg and hosting a photo exhibition in her home city; as well as having a Billy Bragg song written about her, and speaking at anti-racism events across the country.

Last month, the 20-year-old protester was included in a list, by Stylist magazine, of ten specially selected women of “courage and determination” who have had a positive impact on British life during difficult times this past year.

Salma Yaqoob is an activist, commentator and broadcaster from Birmingham, who has previously served as a city councillor for the Sparkbrook ward, former leader of the Respect Party and as head of the Birmingham Stop the War Coalition.

Described by The Guardian as “The most prominent Muslim woman in British public life,” and named in Harper’s Bazaar magazine as one of thirty most influential women in the country, Salma appears regularly on BBC Question Time, where she is best known for having given the former Conservative leader Iain Duncan Smith a dressing down over expenses and inequality.

She has received an Honorary Doctorate from Birmingham City University for services to public life, and is a qualified psychotherapist with a degree in Human and Applied Psychology, as well as Post Graduate Diploma in Counselling and Integrative Psychotherapy. She presently works as a Senior Manager in an NHS Mental Health Trust.

John Rees is a writer, broadcaster and activist, who is co-founder of the Stop the War Coalition and a spokesperson for the People’s Assembly Against Austerity.

The Wiltshire native stood as a political candidate in the West Midlands for the 2004 European election, a candidate in the Birmingham Hodge Hill by-election, and in the 2006 local elections in the Bethnal Green South ward of Tower Hamlets, East London.

A founding member of news media outlet Counterfire, Rees is currently a Visiting Research Fellow at Goldsmiths, University of London.

He has also authored several books, including The Algebra of Revolution, Imperialism and Resistance, Timelines, A Political History of the Modern World.

Maz Saleem is and anti-racism campaigner and the daughter of 82-year-old Mohammed Saleem, who was murdered in Birmingham in 2013 by Ukrainian far-right terrorist Pavlo Lapshyn.

She is an active campaigner against racism and Islamophobia in Britain, has written for a variety of publications including the Independent, and makes regular appearances on news programmes including Channel 4 News and RT UK.

Maz is currnetly in the process of launching an Education for Peace website addressing Islamophobia, in memory of her father Mohammed Saleem.

The ‘No To Trump Visit, Why We Need an Anti-War Government‘ public meeting takes place at The Priory Rooms in Bull Street, Birmingham city centre on Wednesday 21st February 2018, at 7pm.

National protests against Donald Trump’s UK State Visit are planned to go ahead in London and cities across the UK on Monday 26th and Tuesday 27th February.