REVIEW: Halloween fright-fest ‘Drag! Me To Hell’ left me howling for more 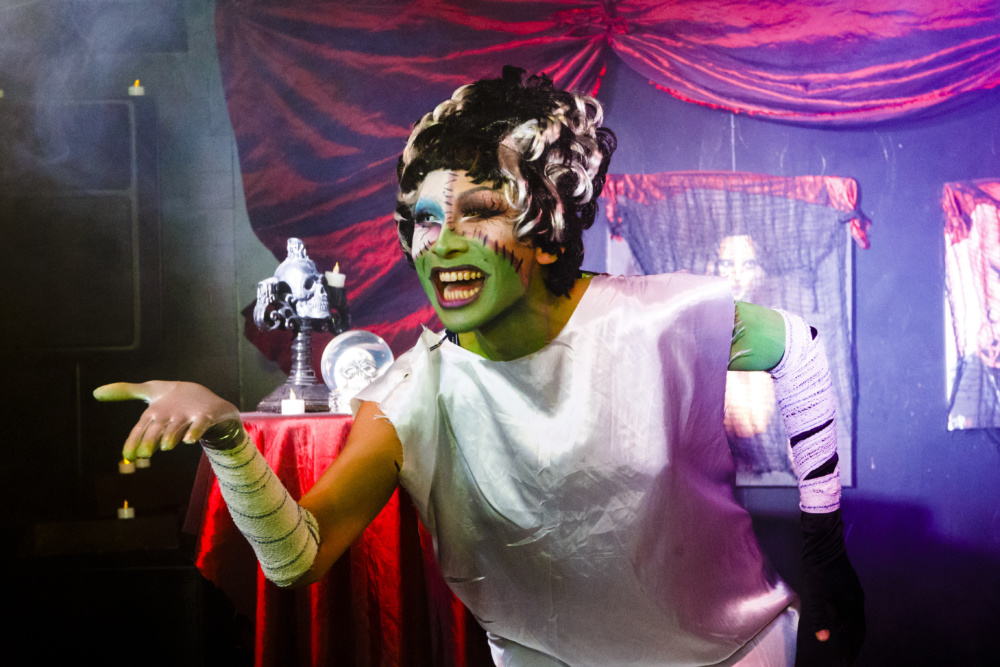 Eva Serration fuses a perfect amount of camp humour with a dark edge in the 'Drag! Me To Hell' show (Photo: Diego Maeso)

Aiming to fuse contemporary drag with both gore and traditional theatrical elements, ‘Drag! Me To Hell’ was a phenomenal success and one I can’t wait to watch again.

For a debut event, not a single performer was underwhelming. Each commanded the stage channeling their talent and originality into every performance. Not one was the same. Each was so unique and confident in the art they were bringing it was truly a pleasure to watch.

Walking in, I’ve got to admit, I had absolutely no idea what to expect. There’s nothing better than going to the Village Inn or the Nightingale main stage and seeing the range of drag performers they have on offer there. What’s so unique about this though is its dark appeal.

Drag Punk are renowned for their dark edge and cutting fashion which has elevated the foursome to high acclaim in Birmingham’s community. Translating that into an entire event, however, is no easy feat. Combining it with Halloween too, I was worried that it would fall into the trap of just being a stereotypical Halloween show with a bit of blood here and there, some suspenseful music and one or two reveals. I had no reason to worry though – as soon as I stepped in that door, any doubt I could possibly have, vanished.

The stage, which I’ve had many a drunken night on, was transformed into an elaborate Victorian-esque platform littered with candles and towering crimson drapes. The dark aesthetic was mirrored by the near sell-out audience; all of whom were dressed to the nines in their best halloween looks. I honestly do believe that Drag Punk were giving a platform to the darker forms of drag that are often overlooked by the classic conceptions of what a ‘Drag Queen’ should be – basically a Drag Race contestant. The creativity in looks both on and off the stage and the hair-raising performances was like nothing I’d ever experienced.

Now, I’m no prude but Ouija boards terrify the living daylights out of me. So when I heard we were doing a seance, I was about 5 seconds away from running for my life. We’ve all seen the movies, we know not to fuck with the spirits.

Thankfully, it was all an illusion though. Lilith, who has the thickest Kent accent I’ve heard as of late, was a stellar host, summoning ‘spirits’ to the stage through the Ouija board. The portal to hell was, luckily, at its strongest during the performance, so we got some good ones. The audience held hands as Lilith chanted to the spirits to come before one of many would grace us with their presence – and a kick ass performance.

Each of the performers were amazing in their own right and each built on the tension of the last keeping us fixated from start to end. If I had to pick favourites though, the stand-outs to me would have to be Ruby Wednesday, Eva Serration and Paul Aleksandr – all for completely different reasons.

Paul Aleksandr gave me something a little unexpected surrounded by such high energy. He opted to go for a low energy number to one of my favourite hits “Sweet Dreams”. With several versions of the hit mixed into one, there was already an air of unease in the room. It’s kind of like when you hear “Ring a Ring o’ Roses” – it’s an innocent enough song but it’s just so unbelievably creepy a-cappella and slowed down.

With a dramatic entrance to the stage, he didn’t need theatrics or, even, a lot of movement to channel his inner demon. Paul is known for bordering the feminine and masculine, and he relishes in this. Add in the horror theme and dark aesthetics and it’s a combination for success for him. On that stage, I wouldn’t wanna mess with him, which is ironic because off the stage he’s the charming driving force behind Drag Punk.

Ruby Wednesday gave me the finale I was hoping for. The best way I can describe Ruby Wednesday’s aesthetic was that of the classic, suave, well-dressed demon in so many horror movies; who you’re just waiting to drag someone to hell.

The fusion of androgyny and drag was tremendous and the confidence made me believe I was watching a star. Enough flattery though. Everyone knows I love a good gag in a performance and this didn’t disappoint. Ruby Wednesday brought out a literal angle grinder and turned it on themselves throwing sparks across the stage. It was the perfect end to a dominating performance and an explosive finale to the night.

Speaking to me after the event, Lilith said, “I think we surpassed what we set out to do and the reaction we got from it was incredible. Seeing the venue full with such a diverse crowd, all there to support Drag Punk and Birmingham drag is amazing, it makes me excited for what we can do in the future. I can’t wait to bring even more to the next show at Christmas!”.

Honestly, I can’t wait either.

All in all, Drag Punk did an outstanding job in pulling off their debut Halloween event. Not only did it succeed but it thrived, giving a platform to a whole new side of drag many of us have never seen. Fusing so many dark theatrical elements with contemporary performance birthed something incredible and I can’t wait to see how this event evolves for their next edition.

Drag Punk’s next event ‘Jingle Hells’ will be held at the Nightingale Club on the 14th December. Tickets are available here.