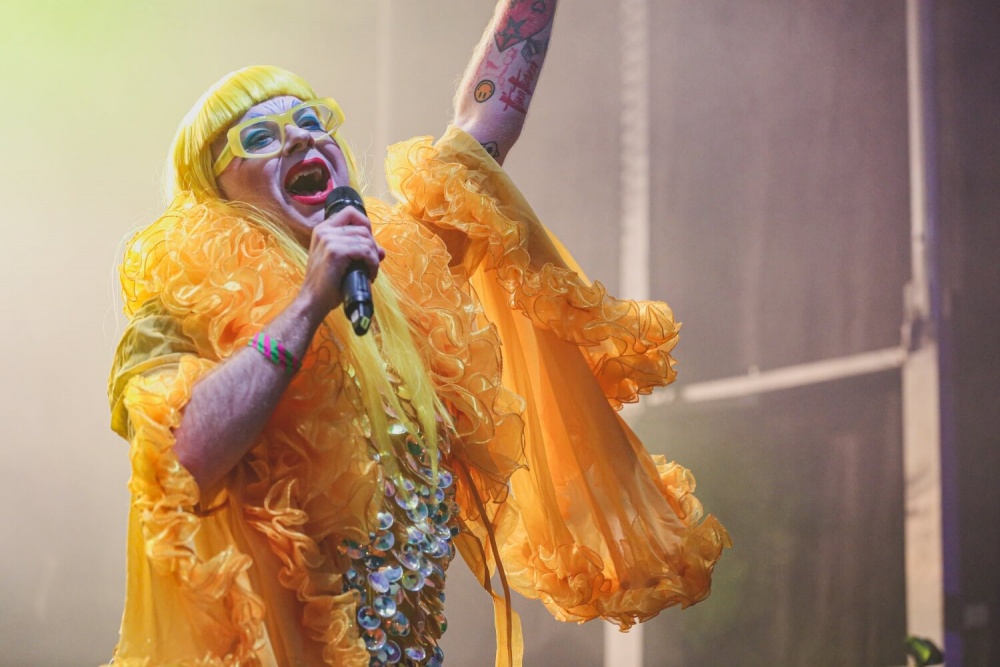 Drag Race superstar and all round loveable rogue Ginny Lemon has joined an incredibly diverse line-up for the Manchester Pride Festival, taking place in August.

Everyone’s favourite lemon-tinged cabaret drag act will be taking their unique persona (and dog show) to the city as part of exciting festivities revolving around Manchester Pride.

If you “fancy a slice?” of Ginny’s outlandish and camp extravaganza, you’ll need to book tickets for Manchester Pride, where you can catch the drag star alongside the likes of Bimini, Charity Shop Sue, Victoria Scone, Danny Beard, Duncan James, House of Suarez, Lady Bushra and Mahatma Khandi.

It’ll be drag heaven on the Cabaret Stage with drag artists also taking to some of the other key zones being graced by headline performers including Nadine Coyle, Melanie C, Nimmo and Dj Fat Tony.

Brum’s influence on our northern friends won’t be limited to their royal highness Ginny, however, as notorious Birmingham scene drag preacher Yshee Black will also be showcasing their talents during the Pride fest.

Manchester Pride has revealed the line-up of entertainment and events for its famous Gay Village Party which, this year, has been co-designed with Manchester’s queer communities in direct response to the Pride In Our Future report.

The Gay Village Party is opening on Friday 26 August with a trans led and curated event, Trans Filth & Joy, and will continue throughout the weekend with its most diverse programme yet including takeovers from Black Pride MCR, Fat Pride and Queer Women’s Takeover.

Mark Fletcher, CEO at Manchester Pride, said: “We’ve worked closely with our communities to provide a lineup which platforms the amazing, diverse queer talent that Manchester has become famed for. And, we’ve invited a few well known friends and allies along to join them on stage as we celebrate LGBTQ+ life and embed a true sense of community across the weekend. ”

The stage will then bring an exciting and diverse range of performances across the weekend with acts including Melanie C, Nadine Coyle, Charity Shop Sue and Drag Race UK star, Bimini.

A host of takeovers co-designed with some of Manchester’s best promoters and DJs to highlight the best queer talent that Manchester has to offer.

Fat Pride will kick off the stage on Friday 26 August, celebrating big bodies with an evening of dancing, partying, showing off and feeling good. With guest DJs, dancers, performers and heaps of Fat Love this will be a night to celebrate big bodies.

Some of Manchester’s best female talent will also be taking to the MancUnity stage for the Queer Women’s Takeover including; DJ Mix-Stress and, DJ Róis, founder of What She Said Club, which gives space to LGBTQ+ women, gender non conforming and non-binary people. Swagga is back with performances from Paigey Cakey, best known for her R&B hits ‘Lovin’ and ‘Ride or Die’; and Manchester’s finest LGBTQ+ RnB DJ’s Stacy Bee, Nkay & DJ KL will be bringing RnB, Dancehall, Afrobeats, UK Funky, Garage and Old Skool sounds to the stage alongside the incredible Swagga Dancers.

Platforming some incredible cabaret acts, the Cabaret Stage will host ‘The Enby Show’, described as an “electric, unique and vibrant” gender-bending variety show that bins the binary and crashes the cis-tem. Plus, The Bitten Peach, a gender-diverse, pan-Asian collective showcasing joy and excellence.

Also taking to the stage, Pecs Drag Kings, an all-female/non-binary theatre and cabaret company who’ve been creating critically acclaimed shows for the LGBTQ+ community since 2013.

The Gay Village Party will draw to a close with the Candlelit Vigil on Monday evening (29 August).

Surrounding these stages will be the ultimate street party, a space for all the different members of the LGBTQ+ family to come together at the heart of Manchester Pride. There will be an array of markets, performances and parties across the venues in the village throughout the August bank holiday weekend.

Other events announced as part of the Pride celebrations include Youth Pride MCR and Family Pride MCR, where young people and families will be able to join in the celebrations with a series of free curated events.

Superbia, Manchester Pride’s year-round programme of culture, will host the Superbia Weekend, offering a series of alcohol-free events for those who wish to enjoy Manchester Pride in a more tranquil environment.

When is Manchester Pride?

Manchester Pride, in partnership with Virgin Atlantic, is its annual flagship event that takes over the city every year across the August bank holiday weekend in celebration of LGBTQ+ life. This year’s event will take place on Friday 26 – Monday 29 August 2022.

Manchester Pride is one of the UK’s leading LGBTQ+ charities. Its vision is a world where LGBTQ+ people are free to live and love without prejudice. It is committed to improving the lives of LGBTQ+ people in Greater Manchester and beyond.

Manchester Pride is part of a global Pride movement that celebrates advancements in equality and challenges discrimination faced by LGBTQ+ people.  Every penny that the charity raises is ploughed back into the community in dedication of its goals.

How much are Manchester Pride tickets:

The 2022 ticket pricing structure is as follows:

£2.50 from every ticket will go directly into the Manchester Pride Community Fund.