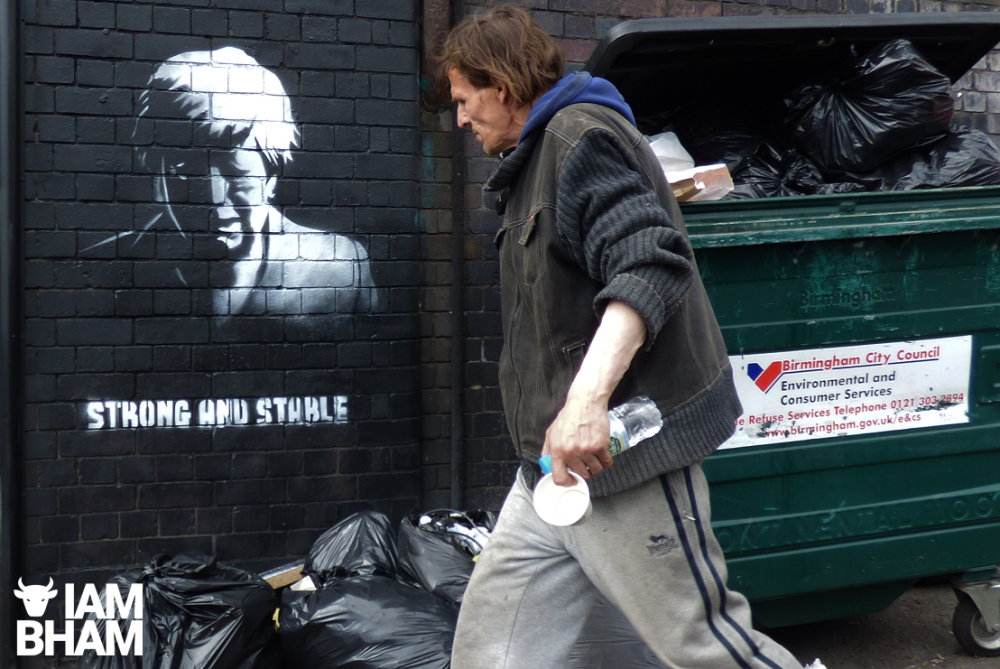 News of Theresa May’s resignation on Friday has inspired street art deriding the Prime Minister, which appeared in Digbeth the very same day as her dramatic announcement.

Local residents woke up on Saturday morning to a stencil depiction of a crying May next to a pile of trash – bearing a sad facial expression – with the words ‘Strong and Stable’ mockingly painted underneath.

The famous phrase is an ironic reference to the Prime Minister’s much used campaign slogan, which drew wide criticism and social media mockery from her opponents.

A local woman who was passing by stopped and was taken aback by the artwork told I Am Birmingham:

“I don’t like graffiti. It’s vandalism in my opinion. But this piece here is making a valid point about the current state of our nation under the Conservative Party.

“It makes me really sad to see our country in such an economic and political mess. The rise of far-right ideology is deeply disturbing.

A man on his way back from a shop paused for a moment to photograph the piece. He told us:

However, as politically satirical as it is, it’s not a Banksy. The artist behind this new work is muralist, calligrapher, and curator Mohammed Ali, who previously painted under the name ‘Aerosol Arabic’.

The Birmingham-based artist, who has created and shared his work at festivals and in cities around the world, has entitled his new art ‘The End of May’.

Writing on social media about his new visual commentary, he stated: “’Tears shed for the self are worth but a fraction of tears shed for another.’ – Schiller”

The fresh street art has generated interest from members of the public, with several car passengers along Coventry Road stopping to take photographs as they drove past the location.

A homeless man who was at the site said:

“This art is my newspaper. I see real truth in it compared to the rubbish I’ve read over the years in printed news. This artist speaks my language.”

This is not the first time Birmingham street art has been inspired by political headlines. In April last year, two huge billboards were taken over by street artist Void One to protest the war in Syria. The anti-war art appeared near the Custard Factory.

The same artist also drew controversy after painting a picture of Jeremy Corbyn standing outside No.10 Downing Street over a billboard near the Old Crown pub in Digbeth last October.

Mohammed Ali has also previously produced street art commenting on topical events, including tributes to boxer Muhammad Ali following the sporting legend’s death. In May 2017, he produced a tribute to a much loved Birmingham teacher Robin Fidoe, who taught at Rockwood Academy.

In May last year, Ali painted a poignant piece on Bradford Street, capturing the likeness of a sniper victim from the ongoing Israeli-Palestinian conflict. This was one of many Palestine related murals and artworks that the artist has created over the years.

Ali’s most recent political art was on Coventry Road in December, highlighting the jailing of Bangladeshi photojournalist Shahidul Alam by Bangladeshi authorities.

Birmingham street artists regularly use their talents to comment upon current affairs as political landscape of the nation continues to shift, and have been utilising a wealth of artistic styles to get their message across.

The artwork is located in Upper Trinity Street which is opposite Bordesley railway station in Digbeth.