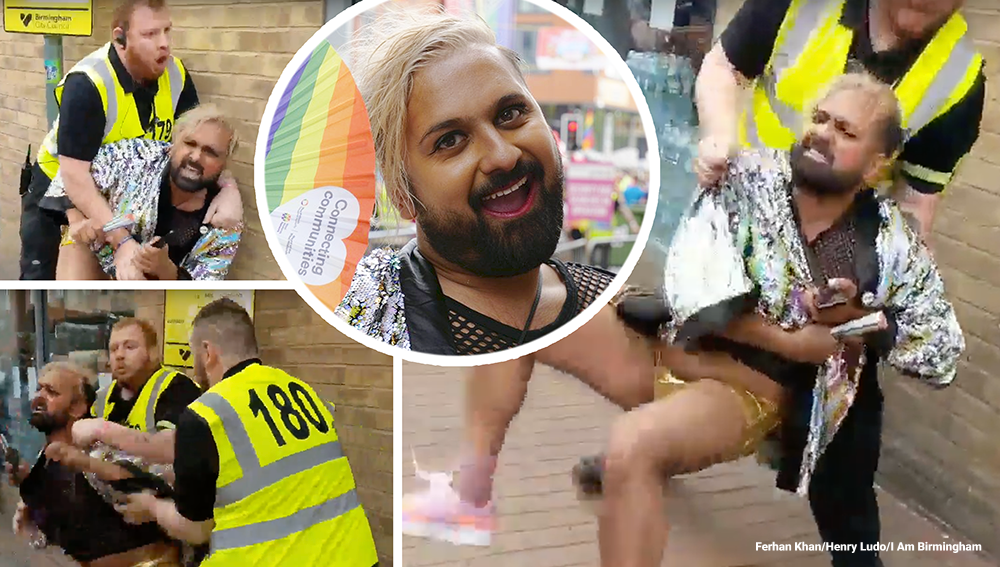 A prominent LGBT Muslim campaigner who co-led this weekend’s Birmingham Pride parade alongside Parkfield School teacher Andrew Moffat and fellow Muslim activists was kicked out of the main event by up to six security staff, despite being allowed in directly by Pride organisers.

Gay Muslim activist Ferhan Khan, 34, claims he was was brutally ejected from Birmingham Pride on Saturday, not long after security staff confirmed with festival organiser Lawrence Barton in person that Khan and Moffat were his “guests” alongside fellow Muslim campaigners Saima Razzaq and Khakan Qureshi, who also led the Pride parade from Victoria Square to Hurst Street in Southside; as part of the first Muslim contingent to ever front the parade in the event’s 22-year-history.

SCROLL DOWN for EXCLUSIVE video of Ferhan being ejected from Pride

All of the guests were allowed in but not all were presented with wristbands or access passes. Yet, upon seeing Khan again and on his own a little later, security personnel reportedly confronted him about his lack of wristband and began “harassing” him, before he was dragged off his feet and pinned to the ground in front of shocked revellers.

Speaking exclusively to I Am Birmingham, Khan said: “I was welcomed into the Pride festival area after the parade by the same security personnel that later assaulted me; I’m sure they recognised me but they still forcibly removed me because I hadn’t been given a wristband.

“After leaving Saima, Khakan, etc. for their interviews, I was milling around the Pride area and I met a friend from Bristol. I was giving him a hug when this security staff member came up to me and demanded to know why I didn’t have a wristband. I didn’t know the name of Lawrence Barton unfortunately so I couldn’t say ‘such and such’ secured me entry; I didn’t even really know of Lawrence’s importance so I tried saying I was with ‘Saima and Khakan’ but that didn’t seem to help.”

Khan’s friend Henry Ludo filmed some of the clash, capturing the security team manhandling Khan before forcing him to the ground. Initially confronted by only one security guard, Khan then had his face and body shoved into the street and was held down by three security personnel.

A member of the public also filming was pushed away by security staff as Khan was pinned to the ground. When asked: “Are you stopping me from filming?”, the guard is shown smiling on camera, and replies “Yes I am!”

Six members of security staff are then shown lifting him off his hands and feet and dragging him out of the official event area.

According to Khan, “The guys were quite intimidating and spoke very harshly and accusatorially with me and I felt very triggered because I could feel they just didn’t want me there and were quite ‘in my face’ about not having a wristband.

“I tried to assure them that I was there legitimately but they just wouldn’t leave me alone; they kept demanding paperwork like emails or something but my friend said they didn’t need paperwork because they paid cash on entry.

“I asked them just to take my word for it that I was there legitimately and that I was at the front of pride (I tried showing them some videos I took earlier) but they weren’t interested.”

Khan, from London, was also fasting at the time and told us he was already feeling weak as a result.

“Anyway, I didn’t feel like I’d done anything wrong, so I didn’t leave quietly like they wanted me to, and I tried to ask them to simply leave me alone; I wasn’t drunk and actually, I was feeling quite tired because as it is Ramadan. I hadn’t eaten or drunk a thing so I was in a weakened state. They wouldn’t leave me alone and eventually the main guy grabbed me and thew me violently onto the ground; then later some more security personnel came and forcibly pushed me to the ground and hurt my arm badly.

“I felt this was all very disproportionate to the fact that I simply couldn’t present my wristband; I wasn’t causing any trouble; I was literally giving my friend a great big Pride hug when they came over to hassle me.”

Throughout the ordeal, Khan continued to challenge the guards and later captured his removal on his mobile phone.

Khan, who had been live-streaming the whole parade to his online followers, recorded himself telling the security team that they were making the event ‘about profit over people’ after they forcibly dragged him out; to which a member of the team jokes: “It’s not about profit, that was about cardio”.

As Khan continues to express his frustrations on camera, stating “I know you’re just doing your job but Pride should be about people, not profit”, he is then confronted by event steward Scott Steggles, who puts his hand over Khan’s camera, asking him to “Stop filming”.

As the recording continues, Steggles is then shown asking armed police officers to “keep an eye on him thoroughly” while ironically telling Khan – a Muslim LGBT activist who was leading Pride only hours earlier – that the event is “about the community”.

Steggles, a Volunteer Ambassador for Birmingham Pride who was stewarding the Pride parade during its two-hour procession – at the very front where Ferhan was marching – then interjects during their verbal exchange, “You were leading the parade, you should know!”

Ferhan maintains that at no point during this whole incident did anyone try and verify his access credentials with the main organisers of the event.

“Eventually the staff members all grabbed one of my limbs each and carried me out of the Pride festival area and threw me at the feet of two police officers carrying massive assault rifles. Then a staff member came out and told those men with guns that I was a threat to Pride and had to be kept away.

“It was all very dehumanising and not at all in the spirit of Pride; especially not one that’s supposed to be about inclusivity of marginalised communities within the LGBTQ community.

“I believe that this behaviour is becoming part and parcel of the commercialisation of Pride; it’s not about empowering a marginalised community any more, it seems to be driven by profit.”

The theme of the Birmingham Pride festival this year in 2019 was supposed to be #LoveOutLoud to encourage inclusivity and love “No matter your gender, sexuality, personal identity, colour, religion or race”.

My experience of the event couldn’t have been further from this sentiment when a group of big burly white cisgender male security staff members assaulted me. It was very triggering to be in that situation because of course I’ve experienced that kind of bullying (as many POC & LGBTQ+ people I’m sure) all of my life from school to the workplace. I never imagined I would encounter it at an LGBTQ+ Pride event. The toxic masculinity they shown was of such a violent nature that I feel scarred by it.

I personally blame the culture of what Pride up and down the country is becoming; corporate events you have to pay for and the sponsorship coming from organisations that care not a jot for the LGBTQ+ community; only their brand reputation and the ability to pinkwash and obscure their complicity in human rights abuses in other geographies.

However, other visitors to Birmingham Pride have suggested Khan was partly to blame for not buying a pass, despite being explicitly told to do so. A source told I Am Birmingham that the campaigner was not originally an official guest or parade lead, but was later allowed into the restricted Pride area after joining primary guests Saima Razzaq, Andrew Moffat and Khakan Qureshi.

This is absolutely disgusting that anyone would be forcibly ejected in this violent way, let alone an LGBT muslim person of colour who helped to lead the parade @BirminghamPride! Where was @LawrenceBarton1? Why no spare wrist bands or guest tags? Appalling scenes https://t.co/lDUQpgWGin

I Am Birmingham captured the moment Birmingham Pride director Lawrence Barton confirmed their entry with security staff, but Ferhan Khan has confirmed he was not issued with an actual pass or wristband, as the other key guests were.

In light of the fracas, which Ferhan Khan has described as “dehumanising”, Birmingham Pride Festival Director Lawrence Barton has contacted Khan directly, pledging to “investigate this fully“.

Lawrence Barton told I Am Birmingham:

“Birmingham Pride treat all complaints seriously and will investigate them, where appropriate, throughly. We can confirm that we are looking into this individual case and therefore it would be inappropriate to make any further comment at this time until all the facts are known and the investigation has been completed.”

“The individual involved was already told he could not have a free wristband and was prompted to buy one… I agree with bad behaviour from security and that needs to be investigated.”

To which, Ferhan Khan has responded:

“Saima Razzaq personally invited me to front the parade several days ahead of the parade and that’s why I was at the front with her. As you can see from several photographs, she didn’t object to my being there. I was invited into the pride festival personally by Lawrence Barton.”

I am so sorry to hear this Ferhan, of course I’ll investigate this fully. I’ll send you my contact number via a private message.

Ferhan Khan is a gay Muslim LGBTQ+ activist and campaigner, originally from Glasgow. He was propelled into the public limelight in December 2016, after appearing on BBC show ‘Muslims Like Us‘. The two-part televised social experiment documented ten British Muslims “with contrasting world views move into a house together” to reveal “what is like to be a British Muslim today.”

During the show, Khan received abuse and ostracisation from some housemates who adhered to a more conservative version of the Islamic faith.

On the programme, he told his fellow faithful, “Being gay and being Muslim are not mutually exclusive things.”

Following the show, Khan has been a publicly outspoken advocate for LGBT+ rights amongst the Muslim and South Asian community.

In The Guardian earlier this year, he reflected: “After I came out, I told myself I wasn’t Muslim. I went to university and avoided Muslims. But in the white middle-class crowd I fell into I felt constantly invalidated for being Pakistani, and that I had to minimise that part of my identity.

“This drove me back to Islam and the discovery that there was a place for me. I allowed myself to be Muslim – now I will not allow anyone to take that from me. The only one who can do that is Allah.”

Also a TV presenter and actor, he recently set up a YouTube channel as a platform for sharing his opinions and activities with the wider world.

Khan has also been vocal about the Birmingham school protests against LGBT equality education, describing the protesters as “insecure” and visiting Anderton Park School to independently speak to the protesters and parents. During his visits, he has filmed himself engaging and coming out to “homophobic” and “transphobic” individuals; and has also had discussions with Jess Phillips MP and Anderton Park School head teacher Sarah Hewitt-Clarkson.

Although he joined the Birmingham Pride parade to mark its first time being led by LGBT Muslims and their allies, Khan is critical of mainstream Pride events being funded by corporations involved in human rights abuses as a cover for their unethical trade actions; a practise known as “pinkwashing”.

I Am Birmingham has reached out to Birmingham Pride organisers for a response to the incident between Ferhan Khan and their security staff. The full video of the altercation can be viewed here.

UPDATE: Responses from Saima Razzaq and Lawrence Barton have been added to this article since it was first published this morning.