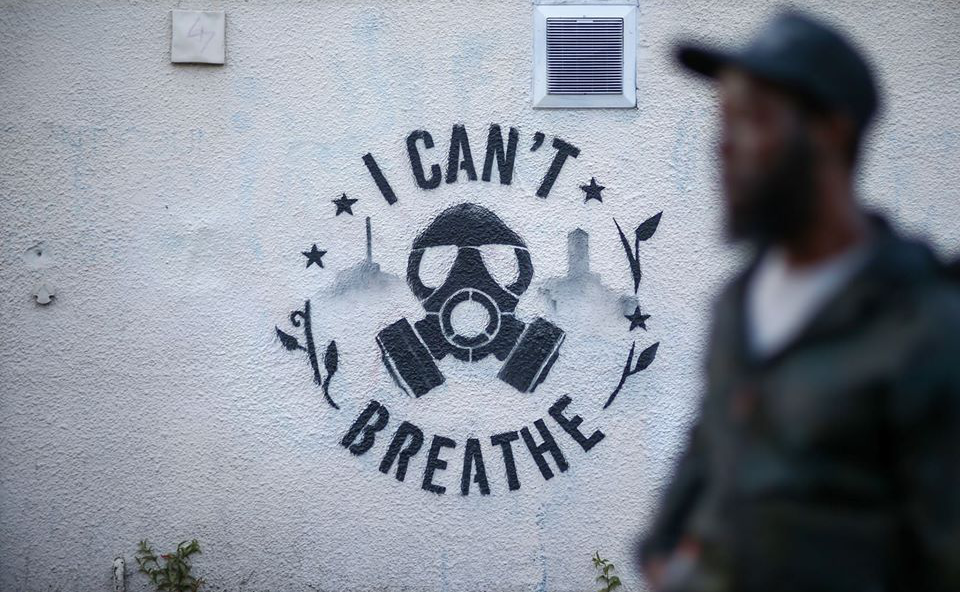 The tragic death of George Floyd, who kept pleading ‘I can’t breathe’ as a US police officer brutally pressed a knee into his neck, has inspired new street art in Birmingham.

The startling and topical stencil was painted in the Kings Heath area of Birmingham on Monday night by Birmingham-based artist, Mohammed Ali. This freshly painted new art is an act of “solidarity” says the artist.

Mohammed Ali is well known for producing street art which resonates with the people and throws a light on topical political and human stories.

He has previously highlighted the plight of the Palestinians, the dramatic resignation of Theresa May, human rights in Bangladesh, and Islamophobia and racism.

His latest work is fuelled by the savage death of gentle giant, George Floyd. The death, which was captured on mobile phones by pedestrians, shocked people in America and has sparked outrage and indignation around the world.

President Trump is currently dealing with the public backlash against the savage murder 0f a handcuffed black man at the hands of a white police officer. Around 40 American states have been placed under curfew.

Ali’s freshly painted stencil, painted in Silver Street in Kings Heath, is a simple yet powerful work that gives voice to George Floyd who tragically lost his life in Minnesota while being violently arrested by a police officer.

Ali uses the balance of two stark colours – black and white – to paint the stencil, and those two colour choices act as a powerful reminder about the theme of racism raging across America.

Racism has no place in a civilised society, and the colour of a person’s skin or religion should not be used a badge or marker to grade a human life.

Ali has taken that concept and applied it to his latest art which brings to life the terrible tragedy that befell poor George Floyd.

The poetic and multi-layered stencil shows a gas mask with a smog-filled cityscape on the horizon, and the poignant plea that George Floyd kept repeating to the police officer – ‘I can’t breathe’ – forms part of a circular frame around the art.

The metaphor for both environmental and human life are brought to the fore in Ali’s tribute to life. A world without freedom, without air, a place devoid of humanity.

The terrifying gas mask also acts as a shocking reminder of faceless authority which cracks downs hard on protestors who dare to question injustice.

There are some stars dotted around the circle which reference the stars and stripes of the American flag, and the art is finished off with some olive leaves which suggests a poetic prayer for peace, a new hope, and a fresh beginning despite the terrible tragedy that took place in Minnesota.

Ali shared his thoughts after painting the stencil last night: “‘ I can’t breathe’ in Silver Street has just gone up in Kings Heath, Birmingham.

“Solidarity across the ocean on the walls here in Birmingham, UK.”

He also spoke about the first reactions to the art: “Wonderful to see people jumping out of cars to connect with a bit of black paint on a wall.

“This is what public art should instil… something that resonates with the people.

“Never underestimate the power of seeing truth upon a wall in a public space.”