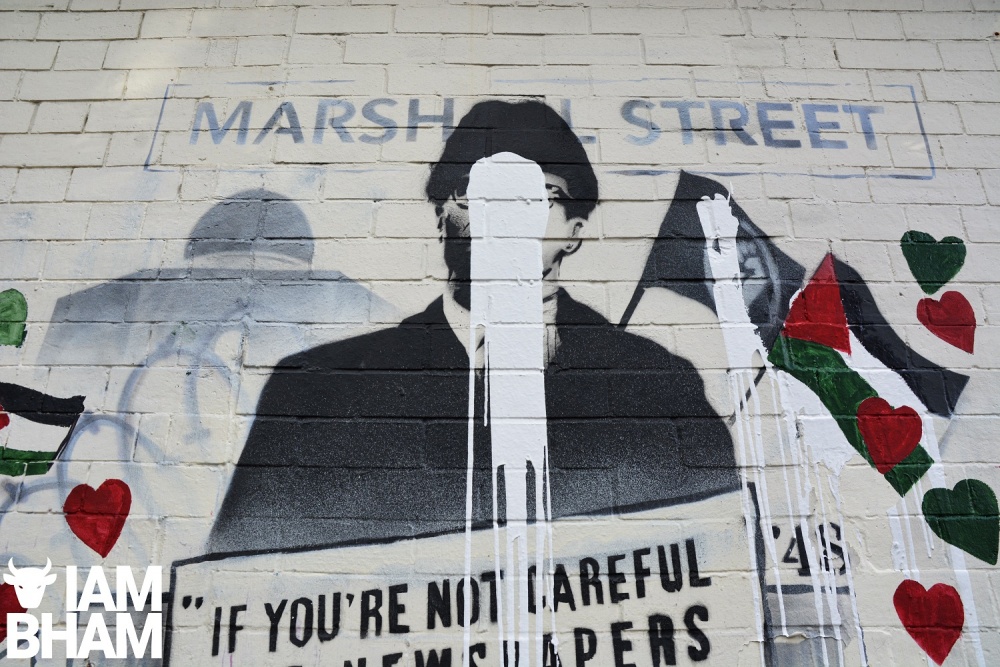 A mural in Kings Heath commemorating the visit to Smethwick by civil rights activist Malcolm X in 1965, with the art showing solidarity with Palestinians, was vandalised this week but later salvaged with a ‘Choose Love’ slogan written over the damage.

The act of wanton vandalism against the artwork has generated more interest in the already popular mural, and people have shared positive messages of support on social media for artist Mohammed Ali who painted the original mural.

A mural, painted with permission, on the walls of Art Rooms Kings Heath, situated on High Street in the Kings Heath area of Birmingham, which threw a spotlight on the historic visit to Birmingham by Malcolm X and combined it with support for the besieged people of Gaza, was targeted by an unidentified vandal and daubed with white paint.

The individual responsible for the audacious art attack on the mural left splotches of white paint across the face of Malcolm X, and also left streaks across the quote and over the two flags that flutter behind the shoulder of the civil rights activist. The two defaced flags are a Palestinian flag and a black flag bearing a clenched fist, a nod to revolutionary activism and solidarity movements representing marginalised minority groups.

Also defaced and covered in streaks of white paint is the number “48” in the mural. The number is a possible reference to the 1948 Palestinian exodus, which occurred when more than 700,000 Palestinian Arabs – about half of pre Palestine war population – fled or were expelled from their homes. The exodus was a central component of the fracturing, dispossession and displacement of Palestinian society, a traumatic and seismic event known as the Nakba.

The damaged mural was salvaged with a confetti of red and green hearts painted over the white paint. The red and green colours of the little hearts – described as “cute and cheery” on a Kings Heath Facebook community page – reflect the Palestinian flag. A number of mini Palestinian flags have also been painted over the vandalised areas of the mural.

In the central area of the damaged mural the slogan ‘Choose Love’ has been written in red over the white paint, with a small red heart at the bottom of the words.

Mohammed Ali, the 42-year-old award winning artist, is well known for producing street art which resonates with diverse communities across the Midlands. His material often sheds a light on social issues and current affairs stories that touch upon themes of oppression and intolerance.

When Ali painted the Malcolm X mural in May this year the artwork immediately attracted positive attention. Ali shared photos of the street art on social media and within hours received around 500 retweets and over 1,300 likes on Twitter, with hundreds more ‘likes’ and shares on Facebook.

The striking mural was painted both as a commemoration of Malcolm X’s visit to Marshall Street in Smethwick in 1965 and as a solidarity tribute to the people of Gaza who endured Israeli bombardment during Ramadan in May 2021.

The street art in Kings Heath was produced during a heated time when 200 Palestinians had been killed, including 59 children, and countless hundreds of civilians wounded by Israel’s controversial military action.

Birmingham-raised street artist and curator Mohammed Ali wanted to challenge the reportage of events that were unfolding in Gaza, where the dominant media angle seemed to be that Israeli air strikes were “justified”.

In his mural the artist combined the historic visit of Malcolm X to the West Midlands with a quote by the civil rights activist, which was illustrated like a newspaper headline, that threw a spotlight on the subjective ways stories are reported in the press:

Reflecting on the attack on his mural, Ali said: “Graffiti is ephemeral in nature. Before it was vandalised, this did it’s job. It serves. It reminds. It connects and moves on, for the seeds it left behind, to grow.”

Ali also sent out a positive response to the art attacker who whitewashed his mural: “Thank you to the vandal of this – it inspires me to do even more.”

One Kings Heath resident, Abdul Malik, told I Am Birmingham: “This is just sad and pathetic. To vandalise art because it says something you don’t agree with is childish. This is an attack on free speech.

“The Art Rooms Kings Heath is a lovely hub for the local community. The coward who destroyed the art won’t win. This will only make people stronger and united.

“The message of Brother Malcolm lives on, and the support for the liberation of Gaza will continue.

The damage to the mural left people shocked and upset, and messages of solidarity and support were posted on social media.

Art Rooms Kings Heath, upon whose wall the mural was painted, responded on Twitter to the uplifting message which now adorns the damaged street art: “To the wonderful artist/artists who have taken time to do this, THANK YOU!!!!”

James Hodkinson wrote on Twitter: “When someone vandalises street art, the vandals don’t necessarily have the last word.

“The piece continues to gather layers of meaning, as people respond, trying to hijack the hijack, undo the damage.”

The negative reaction by the vandal to a popular mural has ironically resulted in attracting further support and love for the message of freedom and solidarity contained in the original mural.