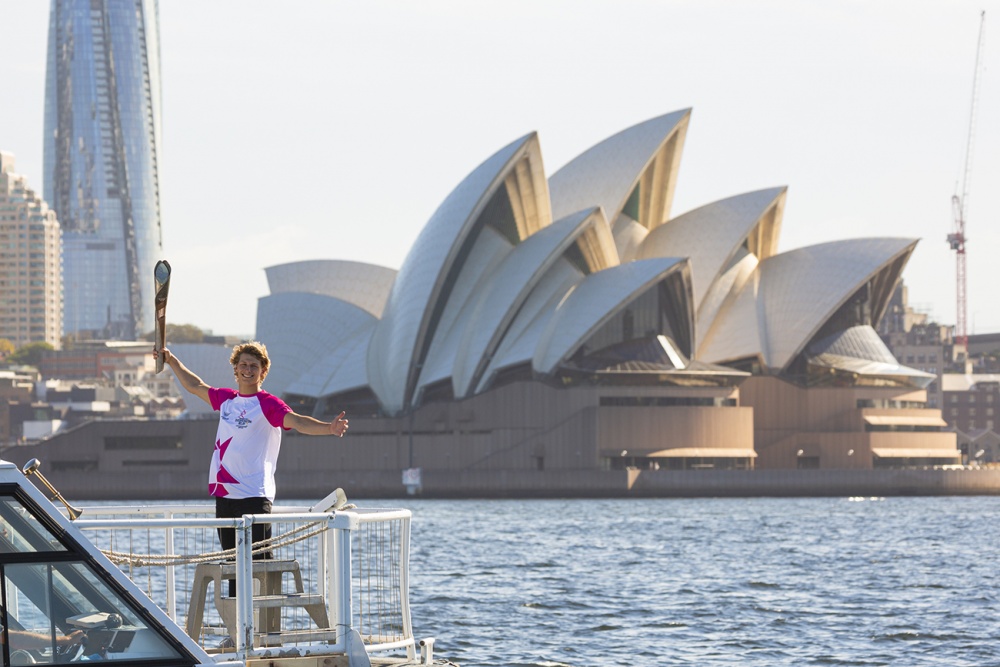 Sam Fricker with the Baton in front of Sydney Opera House

The Birmingham 2022 Queen’s Baton Relay has completed four jam-packed days in Australia from in the last week, where over 50 Batonbearers were selected to represent their countries.

Between 17 to 20 March, the baton’s journey followed recent visits to other Commonwealth Games Associations in Oceania, some of which included Kiribati, Cook Islands and New Zealand.

In Kiribati, the Baton visited Ambo, a village which is planted with mangroves along the coast as a protective measure to counter effects of climate change; while in Cook Islands, brave athletes took on the 775m Boiler Swim along a deep passage to and from the “Boiler”, which is an old shipwreck.

While in New Zealand, the Baton visited Pūkaha National Wildlife Centre which focuses on wildlife conservation and restoration.

The Relay officially began its 294-day long journey on 7 October and is currently visiting all 72 Commonwealth nations and territories, joining cultures and communities together in the lead up to Birmingham 2022.

When each Commonwealth Games Association hosts the Queen’s Baton, they organise an impressive schedule of events to celebrate their local heroes, untold stories, and sustainability efforts. In five-time Commonwealth Games host country, Australia, the Baton was taken to visit several previous Games venues.

The activities in Australia started on 17 March in Gold Coast, the most recent Commonwealth Games host city, with a welcome ceremony performed at Kurrawa Surf Club by Yugambeh Aboriginal Dancers and Uncle John Graham, a Traditional Custodian of the region.

The first day came to a close at Parliament House in Brisbane, where Queensland Governor, Her Excellency the Honourable Dr Jeannette Young PSM interacted with the Baton.

The second day, 18 March, kicked off in Sydney where Commonwealth Games champions Anneliese Rubie-Renshaw, Ridge Barredo, and Sharni Williams took on the role of Batonbearer at Sydney Cricket Ground.

Next, the Baton was taken to visit the Carbine Club, where athletes and Kurt Fearnley Scholarship holders, Alex Tuckfield, swimmer, Indiana Cooper, sprinter, and Sarah Clifton-Bligh, wheelchair racer, were chosen to carry the Baton. The scholarship aims to support young para-athletes with qualifying for Birmingham 2022.

The day ended with a light projection display, by the Birmingham 2022 Business and Tourism Programme (BATP), depicting the Baton’s journey, well as introducing the West Midlands – the host region of the Birmingham 2022 Commonwealth Games – at The Rocks, close to Sydney Opera House.

Longines, official partner of the Queen’s Baton Relay, hosted the Baton at the Longines Golden Slipper race where it was paraded around the Winner’s circle on horseback. Ellie Cole, one of the most decorated para-swimmers in Australian history, and Rohan Browning, who ran the fastest 100 metres ever by an Australian at the Olympic Games, were chosen as Batonbearers for the event.

The day ended at Lakeside Stadium with Melbourne Track Classic 2022, where athletes competed to earn points to meet the standards for Team Australia, to compete at Birmingham 2022. Commonwealth gold medallists Kelsey-Lee Barber, javelin athlete, and Cara Honeychurch, 10 pin bowler, competed in the event and carried the Baton around the stadium. The only time Ten Pin Bowling was included in a Commonwealth Games Programme was at Kuala Lumpur 1998.

The final day of the Australian Relay started at Lake Wendouree in Ballarat, with Steve Moneghetti, legendary Australian long-distance runner, and local athletes completing a lap of the lake.

University of Birmingham, official partner of the Queen’s Baton Relay, hosted the final event of the Australian leg of the Relay at their partner institute University of Melbourne, in the Old Quad.

The event celebrated outstanding students and alumni who have been chosen to be Batonbearers: The seven University of Birmingham-nominated Batonbearers at the Melbourne event were:

The Queen’s Baton will now continue its epic journey and will start its adventure through the Americas, with upcoming visits to Belize and Guyana.

Ben Houston, President of Commonwealth Games Australia, said: “It has been an honour to host the Queen’s Baton down under. Taking the Baton to some of our previous Games venues has rekindled many memories and also reminded us all of the iconic moments of Games past. And it helps focus even more attention on Birmingham for our team as the Games get closer.”

Lisa Hampton, Head of the Queen’s Baton Relay, said: “The nations and territories in Oceania have put on such incredible activities for everyone around the world to enjoy virtually and have let us learn more about their culture”.

CGF President Dame Louise Martin said: “The Australian section has been truly outstanding and it is always a pleasure to go to the country that has hosted the Games on five occasions.

“We remain optimistic that the Games will return to the country in the future. The Baton has helped raise the excitement and anticipation levels for Birmingham 2022 across Oceania as we move ever closer to the Opening Ceremony on July 28.”