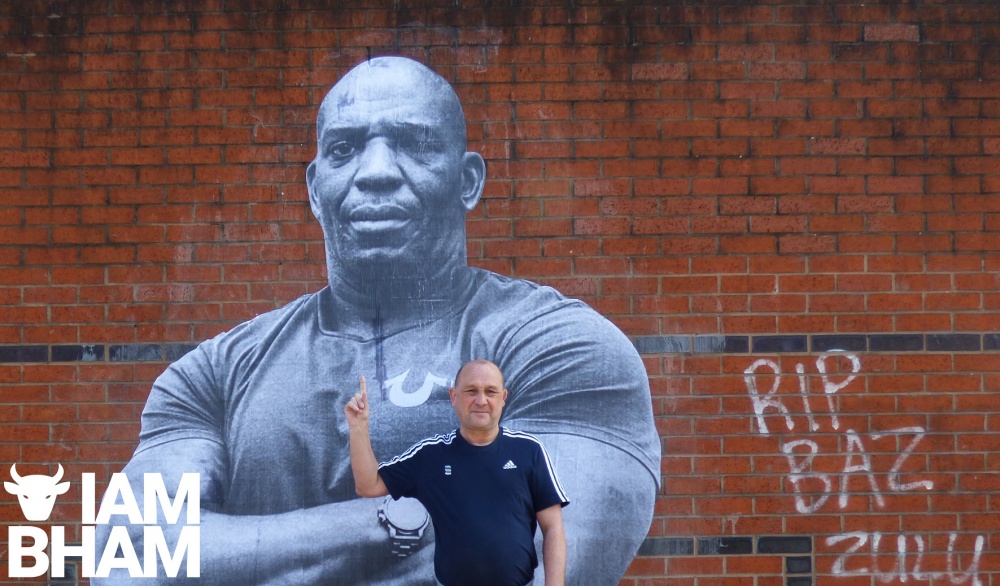 A street art tribute has been pasted up in memory of the late Barrington Patterson, fondly known by all who knew him as ‘One Eyed Baz’.

A much-loved community volunteer and youth mentor from Handsworth, described as “a humble, gentle giant who served humanity”, who sadly passed away on Tuesday (22 March).

The large-scale poster is the work of secretive Birmingham street artist Foka Wolf, an anonymous urban creative whose material puts a spotlight on socio-political themes, and in his most recent works the artist has been celebrating Birmingham’s home-grown icons.

Foka Wolf’s latest work is a tribute to a Brummie who was much-loved and respected both in charity circles and the Midlands football fans fraternity. Barrington Renford Patterson – commonly known as One Eyed Baz – was born in 1965. He was a former football hooligan who turned his back on his wayward past and went on to become a Birmingham hero of humanity for the poor and vulnerable.

Foka Wolf’s giant poster shows Patterson with his arms crossed over his chest, and staring straight ahead, fearless and proud, a man who stood up to adversity, racism, and poverty. The humble giant looks out across the street at the home of Birmingham City FC where he made many memories over the years. Next to his muscular arms, on the right side of the wall, is a tag sprayed in white paint that reads “RIP Baz Zulu”.

Foka Wolf’s tribute, which has been shared and liked across social media platforms thousands of times, has garnered positive praise from the public and from Patterson’s family who have been moved by the heartfelt memorial.

Patterson, who grew up in Lozells, led an incredible and inspirational life, a man who reformed his outlook from a football hooligan in the late 1980s as part of the Birmingham Zulu firm to becoming a champion for the youth and community. His work included delivering food to the homeless, providing assistance to the vulnerable, talking to teenagers about the horrors of knife crime, and inspiring the youth towards a better life.

He left behind the violence of the football terraces and focussed his life towards positivity and humanity. He toured gyms and martial arts dojos and won trophies for kickboxing and mixed martial arts cage fighting in Europe, Japan, and America, and his journey eventually led him to helping fellow human beings regardless of race, age, faith or culture.

His fearsome hard man appearance, which included a childhood injury to his left eye, often intimidated people when they first met him but Patterson’s warm smile, infectious laughter, and his openness melted everyone he met. He was loved by the people of Birmingham and beyond.

Patterson and his beloved wife Tracey set up a charity called Birmingham Homeless Support Team after seeing a dramatic rise in homelessness in the city. Patterson was deeply shocked and saddened when he discovered one of the rough sleepers on the streets was a former school friend. This incident had a profound impact upon him and he vowed to pour more of his time and energy into helping vulnerable people.

Over the years Patterson worked tirelessly to help people stricken with poverty, and he visited prisons and youth centres to offer guidance to reform young people and steer them away from a dangerous life of guns and knife crime. He also mentored and guided young men away from the lure of drug gangs.

A former gang member from Small Heath, who wishes to remain anonymous, spoke exclusively to I Am Birmingham about the positive impact made by Patterson to his life.

The young man, now aged 19, said: “I’m here today because of what Baz taught me.

“I was about 13 when I got stabbed in a park, and when it happened a second time near my school, I thought that’s it, I’m getting a blade.

“I used to pack my blade before I packed my books and pens into my school rucksack. First thing in the morning. I did that for two years, and one day a fight broke out in town and I got arrested.

“Baz met me at one of the group sessions and I’ll never forget the first time I saw him. He looked proper hard. Like a gangster. All of the group shut up when Baz came in.

“But you know what? Within seconds he had us laughing. He was cracking jokes. He spoke to us on our level. He didn’t preach. He didn’t lay down the law like a copper or a teacher. He didn’t judge. Baz was one of us.

“We trusted him. He understood us. He didn’t try to trick or lie. He told us straight.

“And that was it. That day. That same day I decided to stop carrying a knife.

“I joined a gym. Took up boxing. And now I tell my little brother the same what Baz told me. To be a real man you need to help others. Not kill others.

“Baz knew the score. He really knew. Guns and knives are never the answer. Life is the answer. To live, and to help each other. That’s what Baz told us and that’s what made me become a better person.

“If it hadn’t been for Baz I’d probably be in some gang or dead.”

During the pandemic Patterson bravely continued to work and often risked his health to make life better for those who were less well off, and despite the constant threats posed by COVID-19, the people’s champion carried on delivering food parcels and essentials to the poor and elderly.

Tributes have been pouring in from far and wide for Patterson including people who worked alongside him.
The Midland Langar Seva Society – a Sikh charity which feeds the vulnerable and needy in Birmingham nearly every single day of the year, taking a break only on Christmas Day – issued a statement after hearing about Patterson’s death.

A spokesperson said: “RIP Barrington Patterson (One Eyed Baz). A regular volunteer with us and a true humble, gentle giant who served humanity.

“Our thoughts are with Baz’s family and friends, may god give them strength.”

Birmingham City FC, a football club that Patterson supported passionately throughout his life, issued a statement following the news of the tragic death.

A spokesperson for the club said: “The Club are saddened to learn of the passing of lifelong Bluenose, Barrington Patterson.

“All of our thoughts are with his family and friends at this difficult time.

Aston Villa FC, arch-rivals of Birmingham City FC, set aside differences and the club issued a statement after hearing about Patterson’s passing: “Upmost respect the way he turned his life around and the unrivalled contribution he made to the city of Birmingham.

“RIP Baz. May your family find and comfort.”

Cass Pennant, who was once the leader of the notorious Inter City firm but later reformed and turned his life around and began working with the youth, was also deeply saddened when he heard about the news of his friend passing away.

Pennant, who also helped Patterson publish a book about his life, said: “With great sorrow I come here to confirm I have lost my good friend and big-hearted Zulu warrior Barrington Patterson aka One-Eyed Baz, a life to celebrate but right now my heart weeps for his loved ones.”

There were many tributes from the sporting community to Patterson including one from former British boxer Frank Bruno who said: “RIP Baz, just heard that my long standing friend Baz – Barrington Patterson – has passed away. I am in shock.”

A memorial for Barrington Patterson was held this afternoon (Saturday 26th) at Emporium Gym in Tyburn Road.

Foka Wolf, who produced the street art memorial to Patterson, is on a mission to celebrate and highlight Birmingham icons and characters who deserve recognition. His poster of Small Heath icon ‘mad’ Malik attracted lots of love and attention from around the city and beyond when it went up in Digbeth during the festive season last year.