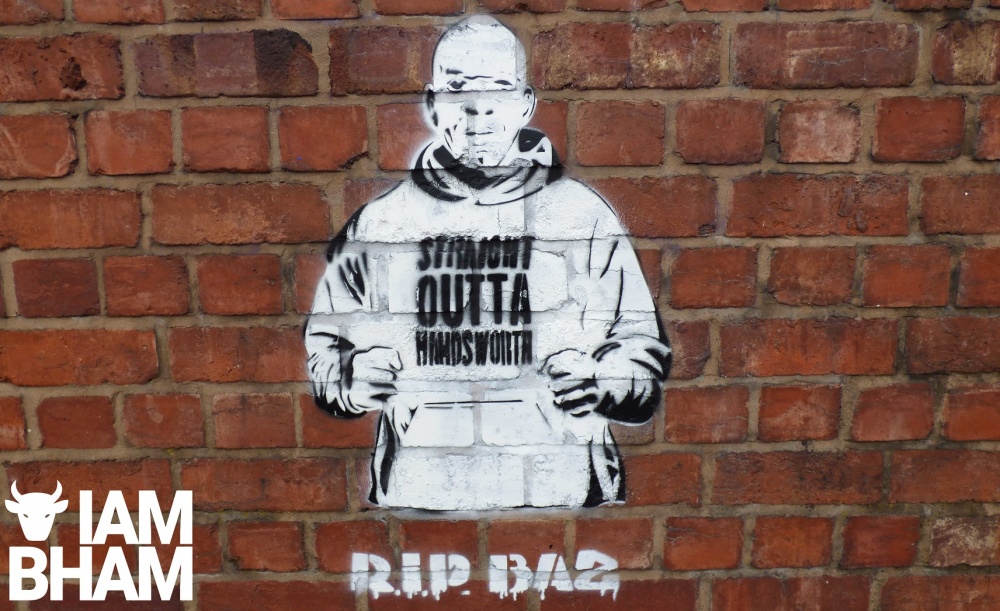 A new street art tribute has been painted in Birmingham to One-Eyed Baz (Photo: Rangzeb Hussain)

After last week’s hugely popular poster tribute by Foka Wolf to community activist Barrington Patterson, a new stencil has been painted in Small Heath near the home of Birmingham City FC.

The new art is the work of a mysterious Birmingham street artist known as Disney who previously painted a poignant tribute to little Arthur Labinjo-Hughes.

As tributes continue to pour in from far and wide for Barrington Patterson – fondly known by all as ‘One-Eyed Baz’ – who passed away on Tuesday 22 March, another street art memorial has appeared in Birmingham.

The freshly painted stencil is on the wall of the railway bridge in Coventry Road which is adjacent to St Andrews, the home of Birmingham City FC.

The tribute to Patterson is the work of a secretive Birmingham street artist dubbed Disney who has previously painted pieces calling for justice for the 21 victims of the Birmingham Pub Bombings which took place in 1974. His early stencils in Birmingham were often mistaken for being the work of the elusive Banksy.

Disney’s latest work is a heartfelt tribute to a proud Brummie whose sudden death left people deeply shocked and saddened. The monochrome stencil shows Patterson dressed in a hoodie with the words “Straight Outta Handsworth” emblazoned across the chest. At the bottom of the stencil the words “RIP Baz” are sprayed on the wall in white paint.

Patterson, who grew up in Lozells, led an incredible and inspirational life, a man who reformed his outlook from a football hooligan in the late 1980s as part of the Birmingham Zulu firm to becoming a champion for the youth and community. His work included delivering food to the homeless, providing assistance to the vulnerable, talking to teenagers about the horrors of knife crime, and inspiring the youth towards a better life.

He left behind the violence of the football terraces and focussed his life towards positivity and humanity. His journey eventually led him to helping fellow human beings regardless of race, age, faith or culture.

His fearsome hard man appearance, which included a childhood injury to his left eye, often intimidated people when they first met him but Patterson’s warm smile, infectious laughter, and his openness melted everyone he met. He was loved by the people of Birmingham and beyond.

Patterson and his beloved wife Tracey set up a charity called Birmingham Homeless Support Team after seeing a dramatic rise in homelessness in the city. Patterson was deeply shocked and saddened when he discovered one of the rough sleepers on the streets was a former school friend. This incident had a profound impact upon him and he vowed to pour more of his time and energy into helping vulnerable people.

Over the years Patterson worked tirelessly to help people stricken with poverty, and he visited prisons and youth centres to offer guidance to reform young people and steer them away from a dangerous life of guns and knife crime. He also mentored and guided young men away from the lure of drug gangs.

Patterson was also known for acting as a peace mediator between rival Birmingham gangs and getting the youth to talk and embrace rather than fight and kill.

A resident from Kingston Road in Bordesley Green told I Am Birmingham about one such incident where Patterson was involved in stopping a fight in a local park just up the road from the Blues football ground.

The 39-year-old woman, who wishes to remain anonymous, spoke about the incident in the local park which took place several years ago but she still remembers it vividly: “There was a gang of kids in Kingston Hill Park which is close to where this tribute to Baz is painted.

“Some of the teenagers were armed with machetes and baseball bats, one was even carrying a javelin and waving it about like a spear. Lots of adults were standing around watching.

“The situation was getting really scary, and the little kids in the park were terrified. Two of the young men started fighting while their friends goaded them on and filmed the ugly scene on their mobiles.

“Suddenly a car stopped near the park gates and this guy ran up and stopped the fight. He ordered the gang to drop their weapons and stand in a line like a football team, and they did it. He then spoke to the teenagers about the dangers of knife crime, and how fights can lead to injury or death.

“After a few minutes he went back to his car and brought back a football. He mixed up the gang members into two teams, and got them to play a game while he refereed the match.

“It was magical to see the kids playing and laughing, and afterwards they were all hugging and clowning around. The hate and violence were gone.

“The name of the man who got them to play together rather than fight was One-Eyed Baz.”

The death of Barrington Patterson will be felt by many in Birmingham. He was described by his fellow community activists as “a true humble, gentle giant who served humanity”.