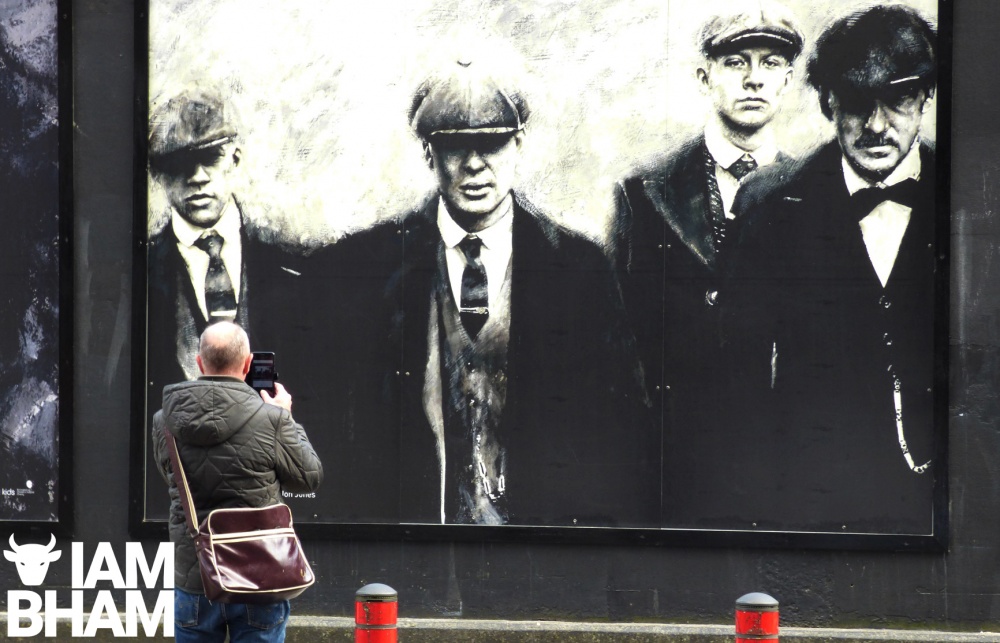 A show-stopping Peaky Blinders art installation, which aims to raise money for Birmingham Children’s Hospital Charity, has been unveiled in the city centre.

The epic 50m open air art gallery displays all of the major characters from Peaky Blinders on a wall outside New Street Station.

The blank concrete wall in Hill Street has been transformed into a dramatic monochromatic gallery featuring all of the big stars and characters from the hit BBC drama series which comes to an end this weekend (Sunday 3 April) as the final episode is screened.

Castle Fine Art, who installed the outdoor gallery, has pledged to donate £1 to Birmingham Children’s Hospital Charity for every image of the wall posted on social media tagging @castlegalleries and #Brum4BCH.

The artist responsible for the incredible Peaky Blinders art installation is Jon Jones who was born in Birmingham. Jones has long been fascinated with the city’s history, and previously worked with the West Midlands Police Museum to explore the criminal underworld of 19th century Birmingham.

With the help of a curator, Jones used archival materials, including police records and mug shots, to weave elements of fact and fiction to produce the noir style portraits which now grace the epic wall in Hill Street.

The artist, whose work has prompted sell-out shows and appeared at the National Portrait Gallery and Birmingham Museum and Art Gallery, said: “I love this city and I am proud to be a Brummie.”

Jones added: “I have had some amazing moments as an artist but to have my work exhibited on the streets of Birmingham, where it will be seen by so many people, leaves me speechless. Especially as the paintings are based on characters by the unbelievably talented and creative Steven Knight, a fellow proud Birmingham lad who has put Birmingham on the map.

“It also fills me with immense pride that it will raise money for the Birmingham Children’s Hospital Charity. An institution that helps and supports so many families in our city.”

Ian Weatherby-Blythe, from Castle Fine Art, said: “Castle Fine Art has long championed local talent and causes close to home. It is with pride and pleasure that we bring this art installation to the city of Birmingham, at once showcasing the work of local artist Jon Jones and raising money for Birmingham Children’s Hospital Charity.”

The project to transform the wall into a stunning artwork has been led by Central BID Birmingham, the business improvement district for the city centre.

Steve Hewett, manager at Central BID, issued thanks to all those involved in bringing the charity art project to fruition: “We are grateful to our partners Castle Fine Art, Network Rail, Birmingham City Council, Hollywood Monster and the artist Jon Jones for helping to make this happen.”

He added: “The installation celebrates the global success of Peaky Blinders, right here in Birmingham city centre on a previously blank high profile wall and will help to raise much-needed funds for Birmingham Children’s Hospital Charity.”

Helen Miles, from Birmingham Children’s Hospital, said: “We’re incredibly thankful to our great friends at Castle Fine Art and Central BID Birmingham for supporting us in this unique way.

“Jon Jones’s portrayal of Birmingham’s infamous gangsters is visually stunning and we’d urge everyone to come and see his artwork next time they’re in the city centre.

“This year the our hospital celebrates its 160th anniversary and we want to make sure we’re here to support the children and families who might need us for the next 160 years, and beyond. If you enjoy the artwork please consider donating to support our sick kids. Every penny raised will make a huge difference to our brave patients in their time of need.”

Joseph Brown, from Network Rail, said: “This installation – inspired by Birmingham’s history and created by one of our city’s artists in support of a fantastic charity – couldn’t be better placed than here at New Street station. We were only too happy to support bringing this incredible mural to life and hope everyone enjoys it as much as we will.”

Peaky Blinders creator Steven Knight recently unveiled a massive Peaky Blinder mural in Digbeth which was painted by street artist Akse. The art garnered lots of praise and was a massive hit with fans of the show.

Speaking about the new charity art installation, Knight said: “I am incredibly proud and honoured that Peaky Blinders has been woven into the tapestry of our great city in such a vivid and brilliant way.

“I hope people will come from far and wide to take their photos and help such a deserving Birmingham cause. From now on in Brum, every blank wall should be seen as an opportunity for art.”

The trials and tribulations of the Peaky Blinders from Small Heath have captivated television audiences both here in the UK and around the world, and there are plans afoot to produce a Peaky Blinders feature film which will be shot in Digbeth.