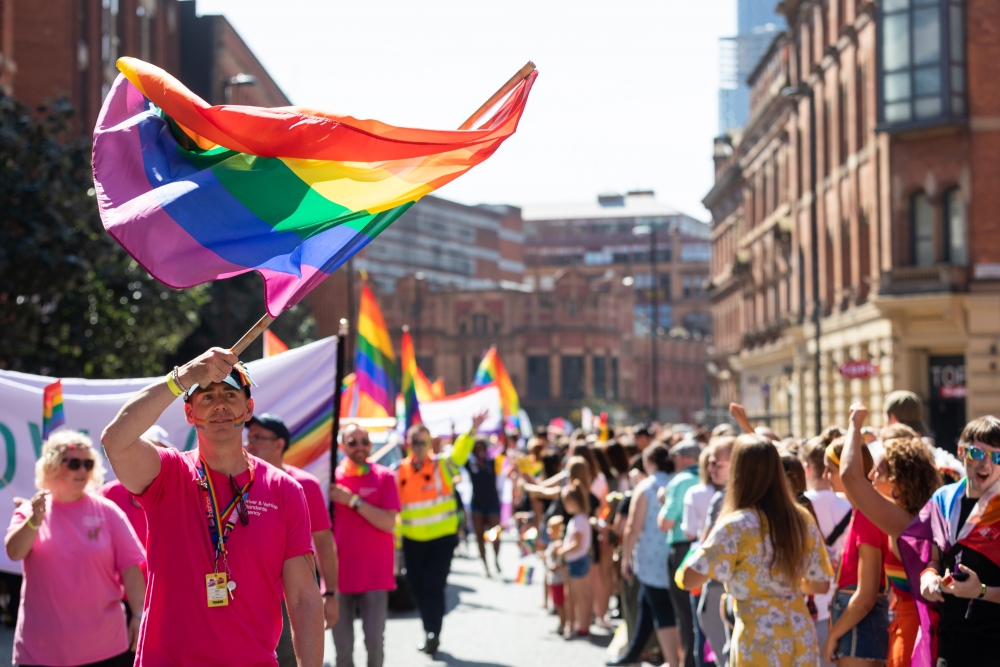 Manchester Pride will return this year with a theme celebrating peace

Manchester Pride has announced the return of its parade for 2022 following a two-year break due to the COVID pandemic, with a brand new theme promoting unity and hope.

The Parade, which will take place on Saturday 27 August, is the city’s biggest, with tens of thousands of LGBTQ+ people and allies gathering to march through the city for equality, with thousands more lining the streets to take in the spectacular sea of colours.

The theme for the official 2022 parade is ‘March for Peace’, with the importance of peace in a world where all LGBTQ+ people are free to live and love without prejudice at its heart.

Mark Fletcher, CEO at Manchester Pride, said: “In 2020 we had decided to theme the parade as our March for Peace.

“Sadly the pandemic took hold and we were unable to take to the streets. As we look around the world today, this theme has become even more relevant. Conflict within and outside of our communities is rife and we are calling on our LGBTQ+ communities and allies around Greater Manchester to join in and support us as we March for Peace.”

Returning after Covid restrictions prevented the Parade for two years, organisers promise the event will be “a show-stopping, feel good procession” that organisers say will wow crowds across Manchester and “send the world a big, bright, colourful message that everyone deserves to live and love with peace”.

“LGBTQ+ people have achieved so much in recent history, however, homophobic and transphobic hate crimes have increased in recent years, with many people still facing discrimination because of their identity,” added Fletcher.

“We are calling on our communities and its allies to come together, embrace differences, and to recognise that everyone deserves the right to be who they are and live their lives in peace.

“Our Parade message is loud and clear this year: No one is really free unless we are all free, and no one gets left behind.”

How to join the Manchester Pride 2022 parade

Unlike previous years, all LGBTQ+ organisations are categorised together whether they receive funding or not, and can apply to participate in the parade free of charge if they apply during the first application wave.

According to organisers, Manchester Pride is also striving to make its events greener, and so are encouraging groups to register the parade as walking entries rather than floats.

For more information can be found at www.manchesterpride.com/parade.

(Visited 12 times, 1 visits today)
https://www.iambirmingham.co.uk/2022/04/15/manchester-pride-parade-returns-march-peace-2022/https://www.iambirmingham.co.uk/wp-content/uploads/2022/08/Manchester-Pride-parade-800x534.jpeghttps://www.iambirmingham.co.uk/wp-content/uploads/2022/08/Manchester-Pride-parade-300x200.jpeg2022-08-02T13:31:07+00:00Staff ReporterCommunityEventsLGBT+NewsWhat's OnAllies,categories,COVID,floats,Gay and Lesbian,Gay Pride,Greater Manchester,groups,Hope,lesbian pride,LGBT,LGBTQ,LGBTQI,Love,Manchester Parade,Manchester Pride,Manchester Pride Parade,Mancs,March for Peace,Mark Fletcher,MCR,Parade,Peace,Pride,Pride 2022,Pride parade,Queer,rainbow parade,rainbows,Saturday 27 August,Solidarity,street parade,theme,UK Pride events,Unity,walking,www.manchesterpride.comManchester Pride has announced the return of its parade for 2022 following a two-year break due to the COVID pandemic, with a brand new theme promoting unity and hope. The Parade, which will take place on Saturday 27 August, is the city’s biggest, with tens of thousands of LGBTQ+ people...Staff ReporterStaff Reporter[email protected]AdministratorI Am Birmingham
« REVIEW: Ashley Banjo’s dazzling Diversity show connects with Birmingham audience
‘Prevent has been a total failure and should be scrapped,’ Muslim leader calls out counter terrorism strategy »