REVIEW: We Will Rock You – a truly magical kind of show 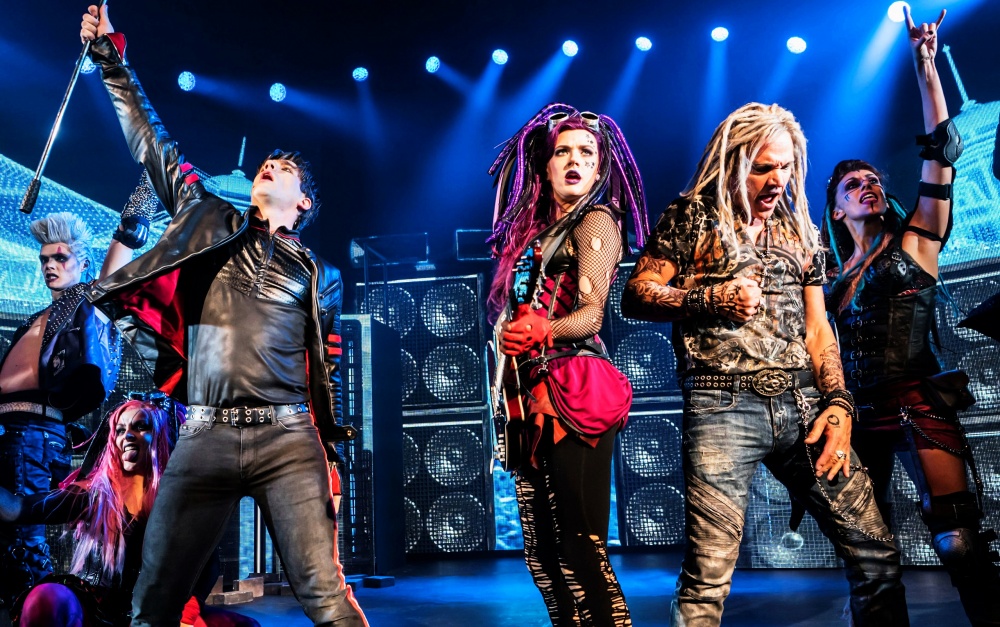 A spectacular production of We Will Rock You arrives in Birmingham (Photo: Johan Persson)

The electrifying songs of British rock group Queen usher in the light and heat of summer in crowd-pleasing musical We Will Rock You which is now playing in Birmingham.

The multi-million pound jukebox musical, which has been delighting audiences for twenty years, is now rocking and rollicking across The Hippodrome stage in a dynamic new version.

Apparently, the premise for this smash-hit musical came in 1996 in Venice after a meeting between Hollywood actor Robert De Niro with Queen musicians Brian May and Roger Taylor.

De Niro and his daughter – both fans of Queen – asked if the iconic band had ever thought about producing a musical based around their songs. This was the germ of the idea that eventually led to the creation of We Will Rock You by Ben Elton of Blackadder fame.

Elton’s book for the Queen jukebox musical was panned and ridiculed by critics when the show first opened at The Dominion Theatre in 2002.

The production initially drew widespread criticism for being camp and over-the-top, with Elton accused of using little more than loose plot threads to connect one Queen song to the next.

However, despite the negative reception given to We Will Rock You by the sharp pens of theatre critics when the show originally premiered, the audiences absolutely loved the music and drama and came to see it in their droves.

The musical proved to be a massive hit with people around the world, and the 20th Anniversary production which arrives in Birmingham to a sell-out crowd, continues the high quality work.

The bookings for We Will Rock You at The Hippodrome have been so phenomenal that the theatre has responded to public demand and extended the show until Saturday 30 July.

Although written two decades ago, the story that We Will Rock You showcases will definitely resonate with the folk of 2022.

The tale at the heart of the successful musical plays out across a dystopian landscape where the population of the earth has been enslaved by a faceless corporation, people work around the clock, food and fuel are scarce, people live in daily fear and paranoia, the news feeds a daily diet of visual and audio opium to keep the masses asleep, social media keeps the masses distracted and trapped in cyberspace, and music has been erased from memory.

A small band of rebels – called the Bohemians – keep alive the some of the melodies which includes the songs of Queen.

These rebellious Bohemians, led by Galileo and Scaramouche, hunger for liberation from tyranny and conformity. The group bravely embark upon the quest to set the world free from the mire of mental and physical slavery.

Well, some of the themes and threads of We Will Rock You sound all too familiar to us in 2022, but this show stomps ahead to shred the darkness and despair with stupendous music, rousing dancing and lots of light and love. Oh, and the comedy elements ensure the show never sinks into despondency.

The singing talent in this show has to be seen and heard to be believed.

These performers are unearthly in the way they so easily, and comfortably, sing and dance each in each sequence, and their dramatic talents are also to be praised. The icing on the cake is the way they add a layer of comic timing and phrasing to some of the scenes.

Ian McIntosh, as Galileo, put his very life force into the role. He sang every note with such a searing and heartfelt quality that it made the hairs on the back of your neck stand up. There were moments where McIntosh seemed to be uncannily channelling the spirit of the late Freddie Mercury (Farrokh Bulsara) himself.

Elena Skye takes on the part of Scaramouche, and she mesmerised the audience with breathtaking vocal agility.

Special mention goes to Jennifer O’Leary as Killer Queen – who was thunderous and witty, and seemed to be referencing Cruella de Vil for some of her hilarious outbursts – and Adam Strong who brought a dramatic and charismatic edge to the role of Khashoggi.

Michael McKell, as the playful Cliff, was a hit with the packed audience at The Hippodrome. His impeccable comic timing, and mischievous innocence, had the audience in stitches.

This spirited show, bold and booming, and brilliantly directed by Ben Elton, is immensely entertaining, and no expense has been spared to astound and excite the audience.

The art and sound design, including choreography that makes the pulse race, are truly magical. The scintillating production is a stirring tribute to the memory of legendary Queen frontman Freddie Mercury who continues to live on through the passionate songs of Queen and this spectacular stage show.

We Will Rock You delivers 24 Queen songs in a 24karat gold show.