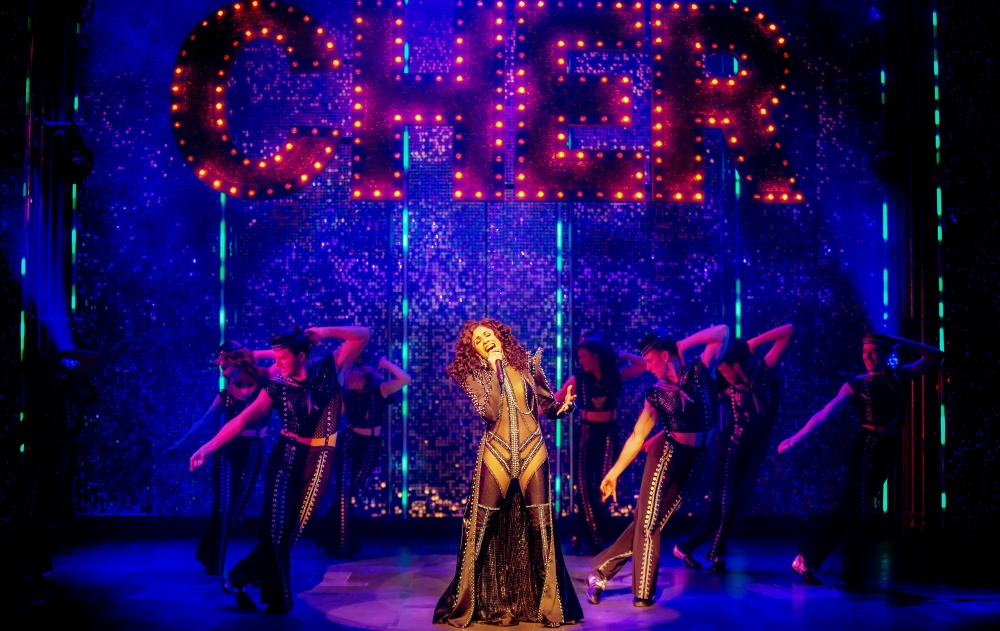 The Cher Show, which opened on Broadway in 2018, arrives to Birmingham in an electrifying and joyous production that raises temperatures as it charts the life and music of a legendary entertainer.

The Birmingham Hippodrome proudly unveils the eagerly-awaited summer show that had the audience fired up right from the start with three talented West End stars playing the role of Cher.

This Tony Award-winning show may have the outward appearance of a jukebox musical – it boasts 35 of Cher’s hit songs – but it goes deeper, and offers a richer and more complex emotional experience, by throwing a psychological spotlight on the life and music of a pioneering and talented woman who first hit the charts in the 1960’s and who still continues to hit the music headlines in the 21st century.

Born Cherilyn Sarkisian in 1946 to an Armenian father and mother who had Cherokee ancestry, the world would come to know her as Cher – a trailblazing pop star with such a unique and warm speaking and alto singing voice that she would be instantly recognisable wherever she performed in the decades that followed. Her career would continue into the 21st century and a new generation of singers, dancers and designers would hail her as a major influence.

Writer Rick Elice’s and director Arlene Phillips’s concept for the rollercoaster stage show, which chronologically follows and celebrates the dramatic life and music of the legendary and fiery singer and Oscar-winning actress, is to reveal the three major phases in Cher’s musical career and have each of those phases played by a different performer.

The young teenage Cher – referred to as ‘Babe’ in the show – is performed by Millie O’Connell. She plays the role with wide-eyed innocence and exuberance, a young girl dreaming of singing and reaching for the stars.

Her interactions with her mother, and later with Sonny Bono, are delicately observed, and she makes the audience root for her as she places her trust in the hands of people who would later go on to betray and abuse her love.

O’Connell’s singing is eerily pitch perfect, and she sounds like the Cher of the mid-1960’s, and her landmark duet – I Got You Babe – with Sonny (played by a charismatic Lucas Rush) is emotionally haunting because the audience is all too aware of the betrayals to come from the men in her life.

The Cher Show is not afraid to cast a light into the darkness that sometimes shrouded the life of a woman whose personal battles, including surviving heartbreak and pain, would leave her stronger and more determined to rise up and move forward rather than sink and drown in despair.

The show uses powerful drama to convey the fractious relationship that Cher endured with Sonny. They both appear happy and relaxed when under the spotlight of concert venues and recording studios, yet bicker and fight when away from the public eye.

The high points in Cher’s life are also contrasted with the personal and professional nightmares that she had to continuously battle and overcome.

Also, in a bold and courageous move, that ties in with the contemporary world’s desire to have honest conversations about racial and gender equality, the show explores the background to some of Cher’s back catalogue of songs.

In one poignant and shocking sequence the audience learns about the painful inspiration behind the song Half Breed which highlights the racism levelled at Native Americans.

Apparently, due to the young Cher’s dark hair and reddish complexion, she was bullied and called ‘half breed’ by callous and jeering schoolmates. Cher would take this negative experience and turn it around to produce a song that challenges racism via the tool of her musical gift.

Cher’s powerful songs are often laced with stark truths grafted from her own experiences and includes themes such as heartache, inequality, prejudice, loneliness, and grief.

Yet despite the grim subject matter in some of her songs, she raises the human spirit with lyrics that speak about healing, compassion and survival in a male-dominated world where women are often seen as weaker and inferior to men.

The choreography by Oti Mabuse (Strictly Come Dancing) is right on the pulse of Cher’s sublime and sensual dance numbers across the years.

Danielle Steers, who plays Cher as ‘Lady’ in the middle era of her long career, dances each of the numbers with dynamic and smouldering athleticism.

Steers sings, moves, and weaves her lithe body like a living breathing musical instrument. Every movement of her fingers and wrists, every flutter of her fiery eyes, and every subtle swing of her hips becomes a visual vocabulary that adds depth to her performance.

As the show moves into the latter part of Cher’s life the role is taken by Debbie Kurup who plays the role of Cher as ‘Star’.

Kurup not only convinces with her powerful and emotive vocals, but she sizzles and sparkles as she rhythmically shakes her hips whilst wearing skimpy outfits – vividly recreated for the show by costume designer Gabriella Slade – that caused outrage when Cher defiantly broke away from convention and wore them with sexy flamboyance in the 1990’s.

Gleaming thigh-length boots with flashing heels, fishnet tights and garters, and long flowing robes that seemed to be more suited to a bordello than a live concert, all this and more, Cher fearlessly and boldly went where few female artists dared to go.

The show tells how criticism from men only drove Cher to work harder. She refused to be cowed into submission by the guardians of social morals.

Her warrior spirit was too strong to be subdued by censors, and the show reveals the dramas and trials that Cher experienced and overcame throughout her long and varied career in music, stage and film.

The three women who play the three phases of Cher have shockingly never met Cher yet they each perform the roles in such a realistic manner that the audience is left with the impression that they must have been schooled into the roles by the iconic Queen of Las Vegas herself.

Cher’s spirit seems to flow through O’Connell, Steers and Kurup. This show is more than a mere tribute act, it magically transports the audience into the musical world of Cher at different points in her life.

Tom Rogers’s set designs and Ben Cracknell’s unique lighting bring a distinctive ambience to each stage of Cher’s life story. The time frames are evoked powerfully through the tones and hues used in each segment.

The sound design by Dan Sampson is sensational, and in the intros to some of the songs the very ground of The Hippodrome seems to vibrate and move as waves of music rush and flow around the auditorium in an exhilarating manner.

This is a ground shaking, booty shaking, finger clicking and toe-tapping show that tingles the spine and tantalises the eyes and ears.