BBC Midlands HQ to move from Mailbox to new Digbeth base, broadcaster announces 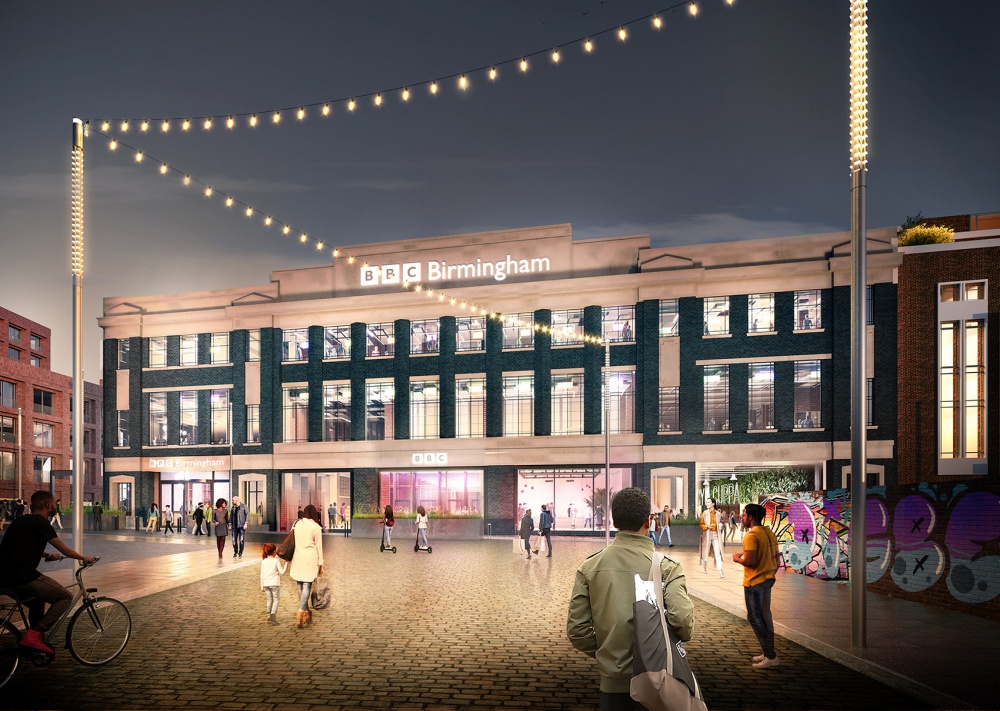 The BBC is moving its Midlands studios from Mailbox Birmingham to a brand new location in Digbeth (Photo: BBC)

The BBC has unveiled plans to move its main Birmingham base to the new creative quarter in Digbeth from 2026.

Currently based at The Mailbox, BBC Midlands will relocate to a new purpose-built broadcast centre at the former Typhoo Factory site in the city.

The decision has been taken as part of the BBC’s Across the UK strategy to transform its impact across the Midlands. The new cutting-edge centre – which will cost less to run than The Mailbox site – will also support delivery of the corporation’s net zero commitments.

As the anchor tenant, the BBC will be a catalyst for the wider creative regeneration of the Digbeth creative quarter, helping to attract additional investment and production to the Midlands.

All of the teams currently based at The Mailbox, including Newsbeat and the Asian Network (who relocate to the city later this year) will move to the new fully accessible centre.

Digbeth Loc Studios, the future home of the BBC’s flagship food entertainment strand MasterChef, will be adjacent to the BBC’s new home.

Tim Davie, BBC Director-General, says: “This is another important day for the region. We said we would do more in the Midlands and we’re delivering. The new broadcast centre in Digbeth will give our teams the best facilities and technology to serve audiences for decades to come.

“Moving our Birmingham headquarters to Digbeth is going to help build the creative success of the region – drawing new investment and production to the Midlands – and sits at the heart of the BBC’s Across the UK plans to deliver significant increases in editorial spend and decision-making outside London.

“This decision is one of a number of exciting announcements which strengthen our commitment to the region, including the relocation of programmes like MasterChef and Newsbeat.”

BBC Midlands – sometimes referred to as BBC Birmingham – originally moved to The Mailbox in 2004 but the broadcaster’s lease comes to an end in 2026. The upcoming move to the former Typhoo Building does not include the BBC’s drama village which is based at the University of Birmingham’s Selly Oak campus and produces drama including Doctors.

Stuart Thomas, Head of BBC Midlands, says: “This is the perfect home for the BBC in the Midlands, a building steeped in history now waiting to come back to life in one of the most up and coming, creative districts in the country.

“The reimagined former Typhoo Factory will be far more visible for our audience, in a greener, more accessible and more flexible space. We can’t wait to take up residence there, continuing to build on what we do best making the news and programmes in the Midlands that we all really care about.”

The Typhoo Tea factory, in Bordesley Street, was founded in 1903 by John Summer, and became one of the most advanced tea production factories during the 1930’s. The factory survived bombing raids by the German Luftwaffe during World War Two, and by 1978 the factory closed down.

Over the years it has been largely left in a derelict condition with only the occasional unit being rented out as warehouse space.

The decayed and abandoned appearance perfectly suited Hollywood director Steven Spielberg vision in 2016 when he came to the city and used the Typhoo Tea factory as one of the locations for his dystopian film Ready Player One.

In recent years the abandoned factory has been a favourite haunt of urban explorers, and also intermittently used as shelter by vulnerable people. However, authorities boarded up and sealed the place to prevent access in case of people coming to harm inside the decayed interior of the building.

Once the plans have been approved – BBC Executive and BBC Board have given approval but legal issues need to be ironed out – BBC Birmingham aims to regenerate the dilapidated factory and turn it into one of its most sustainable studios which will offer lots of flexibility for creators and crews.

Andy Street, the Mayor of the West Midlands, said: “I am incredibly excited that the BBC are starting a new chapter in the West Midlands with this major investment to create their greenest and most modern facility ever – right here in the heart of our region.

“Not only will their phenomenal new home at the former Typhoo Factory act as the catalyst for the wider regeneration of Digbeth to become a global creative quarter, but it will also act as a magnet for young creative talent right across the West Midlands and the wider UK.

“I am grateful to the Director-General Tim Davie for showing such confidence in the West Midlands, and for working with us to bring our memorandum-of-understanding to life.”

Cllr Ian Ward, Leader of Birmingham City Council, added: “I’m absolutely delighted at this huge vote of confidence in Birmingham. As the BBC clearly recognises, this is a city on the up and our creative industries will have a big role to play in this golden decade of opportunity for Birmingham.

“The 2022 Commonwealth Games have showcased Birmingham’s youth, energy and creativity. Our city is full of untapped potential and the BBC’s investment will help it to flourish and grow, creating new jobs, skills and opportunities for our citizens.”

Earlier this year the BBC announced that all four MasterChef titles are moving to Birmingham; an Apprentice Hub opened last month helping more people to work in the sector; and Newsbeat and the Asian Network move to the city in the autumn.

According to a BBC spokesperson, “More programmes have been commissioned in the region including Two Tone from the creator of Peaky Blinders, Steven Knight and Phoenix Rise for BBC Children’s.

“The BBC is broadcasting over 200 hours of live sport from the city throughout the Commonwealth Games supported by additional content across BBC TV, Radio and Online.”

The announcement of the BBC’s preferred development site – which has been approved by the BBC Executive and BBC Board – is subject to concluding legal agreements over the coming months.