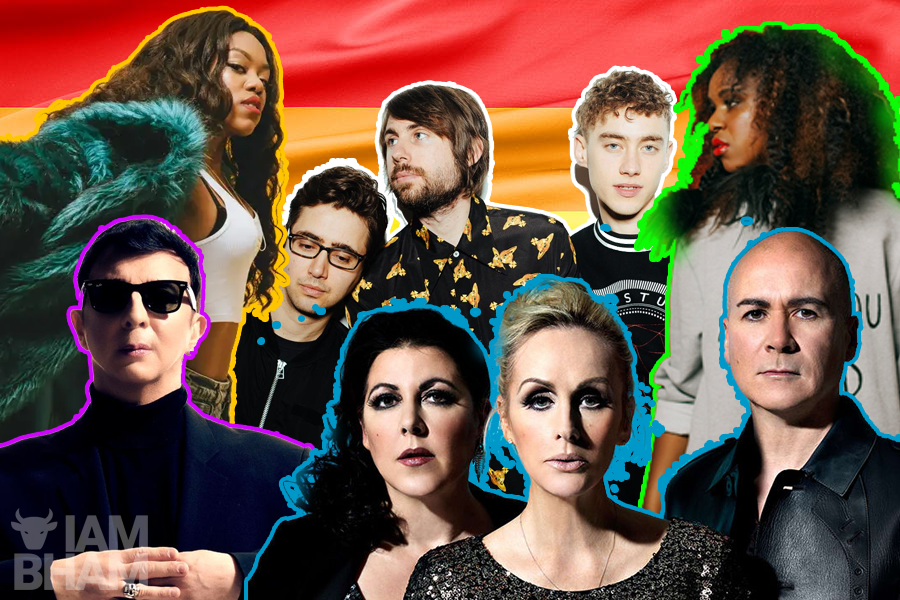 With organisers promising the largest ever main stage, Birmingham Pride is set to welcome an incredible array of talent to the Main Stage next weekend!

Following on from the carnival parade, that kicks off at noon on Saturday 25th May, acts such as the Human League and Years & Years are set to take the the main stage in what are sure to be some draw dropping performances.

Last year’s headline artists at the festival included Courtney Act, Jake Shears from Scissor Sisters and MNEK, but will this year’s talent be able to top them?

The theme of this year’s festival is Love Out Loud, with organisers saying: “In a world where oppression and persecution of the LGBTQ+ community still exists, teen suicide continues to be a major issue and trans rights are being pushed back, even in countries considered to be progressive, now is the year to ‘Love Out Loud’.”

If you’re curious at to who will be ‘Loving Out Loud’ on the Virgin Trains Main Stage, see our handy guide below:

Alice Chater – known for her tracks “Hourglass” and “Thief” – has already caught the attention of Black Eyed Peas’ Will.I.Am, Swedish House Mafia and legendary American songwriter Mozella. Opening up for Jessie J and Professor Green, her dance pop sound and high-concept videos have helped her gain commercial success. The pop singer had her first headline, sellout show in 2018 and went on to tour the UK with MNEK.

Award winning grime MC and producer Lady Leshurr has seen millions of views to her “Queen’s Speech” series which currently sits at fifty million views on YouTube. She has sold out shows from New York to Brixton whilst attracting the attention of international heavyweights like Timbaland, Erykah Badu, and Busta Rhymes. After coming out as pansexual to Billboard, Lady Leshurr is expected to return to the Birmingham stage with welcome arms.

M.O are an English recording group consisting of members Annie Ashcroft, Chanal Benjilali and Nadine Samuels. After the departure of Connolly, the group made a comeback in 2018 with their new single “Bad Vibe”, featuring Lotto Boyzz and Mr Eazi. Following their amazing performance at the Nightingale Club, the MOBO nominated band are set for an amazing performance at Birmingham Pride.

English singer-songwriter Kate Nash is set to bring the grunge and rock to Birmingham Pride. A former BRIT Awards winner for ‘Best British female artist’, she rose to fame in the UK with the top ten single “Foundations” and her number one debut album “Made of bricks”. Having released a new track “Trash”, a song that condemns environmental pollution, back in January 2019, it’s Nash’s first output since 2018’s crowd-funded album Yesterday Was Forever. She is now currently starring in the massive Netflix series Glow.

One of the biggest names in RnB, MYA will be performing some of her biggest hits including “Lady Marmalade”, “Case of the ex” and “Ghetto Supastar (That Is What You Are)”. Mya unveiled her eighth studio album TKO, which celebrated 20 years since she released her first single “It’s All About Me.”

Mabel is is a Spanish-English singer-songwriter who had her breakthrough in 2017 with her first UK top 10 single “Finders Keepers”.  In January 2019, Mabel was nominated for British Breakthrough Act at the 39th Brit Awards and released “Don’t Call Me Up”, which debuted at number 11 on the UK Singles Chart. The song peaked at number three becoming her highest-charting single to date. Her debut studio album, High Expectations is set to be released on 2 August 2019.

Chart topping Bruce Fielder, otherwise known as Sigala, has recently dominated the UK Top 40 with his huge singles “Sweet Lovin” and “Came Here For Love”. He’s worked alongside huge names such as Ella Eyre, Paloma Faith and the legendary Nile Rodgers. His album, Brighter Days, reached number one on the UK Dance Charts.

Years & Years are a British synth-pop band, founded in London, United Kingdom. The band consists of Olly Alexander, Mikey Goldsworthy and Emre Türkmen. Their singles include “Sanctify” and “If You’re Over Me”, the latter of which reached the top 10 in the United Kingdom. Having collaborated with MNEK for song “Valentino”, Years & Years are enjoying the massive success of their album Palo Santo. The pop trio are currently embarking on the Palo Santo World Tour to compliment their second studio album of the same name.

Having successfully put on a mini festival last November at Nightingale Club, Glittersh*t are set to open the main stage. The out-there artistic drag collective are bringing the glitter, freaks, and 90’s beats.

A full, 16 piece, live orchestra with full effects will play their sensational Queens of Pop set featuring tracks from Britney to Whitney, Chaka Khan to Beyonce and everything in between. Taking the live music scene by storm with their orchestral renditions of classic albums, the group are set to dazzle the Virgin Trains Main Stage.

Five (stylised as 5ive) are a British boy band from London consisting of members Sean Conlon, Ritchie Neville, and Scott Robinson. The heart-throbs topped the pop charts with hits like “Slam Dunk (Da Funk)”, “When the Lights Go Out”, “Everybody Get Up” and “Keep On Movin”.

AJA is the stage name of Jay Rivera, an American drag performer, rapper, and reality television personality best known for competing on season 9 of RuPaul’s Drag Race and season 3 of RuPaul’s Drag Race All Stars. Their album, Box Office, is a vicious, scorched-earth trap debut. After winning the hearts of Drag Race fans across the world, AJA is set to put on a stellar set fusing rap, dance and drag theatrics to satisfy any desire.

BRIT Awards and MOBO award nominated NAO has gone on to have two top five selling albums and collaborated with Chic, Disclosure and Mura Masa. Having recently performed on NPR Tiny Desk, her sound has been described as soul combined with electronic music, funk and R&B.

Marc Almond was one of the biggest stars of the 1980s, thanks to his many hits with Soft Cell and as a solo artist. Having recently performed at the Symphony Hall,  the 61-year-old star announced he had no real reason to be touring on this occasion with “nothing to flog”, but simply fancied getting back under the spotlight.

The iconic 80’s supergroup are best known for their renowned hits, “Don’t You Want Me” and, “Mirror Man”. The group were among the earliest, and the most creative, artists to break into the traditional pop scene using synthesizers and ingenious electronic rhythms. Their success has seen them sell over 20 million records worldwide.

Faithless are a British electronica band consisting of Maxi Jazz, Sister Bliss and Rollo. The group is best known for their dance songs “Salva Mea”, “Insomnia”, “God Is a DJ” and “We Come 1”. Something of an anomaly in dance music, Faithless strive for originality in their sounds, intelligence in their lyrics as well as seeking to become a respected live band in the fullest sense of the word.