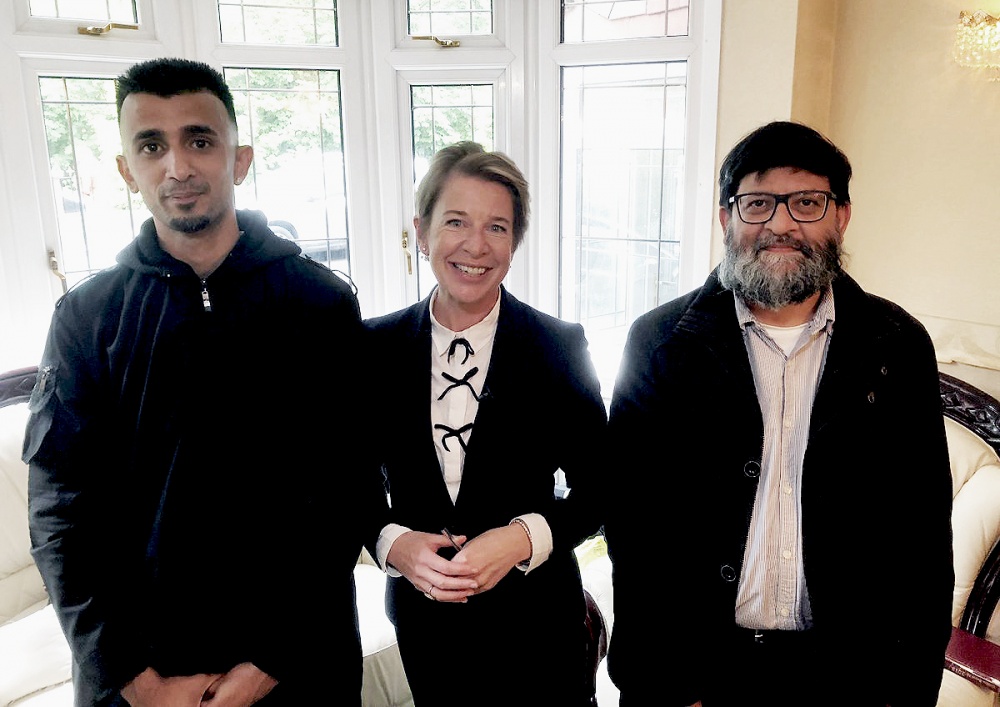 Controversial social commentator Katie Hopkins has joined forces with leaders of the Birmingham school protests against LGBT education equality, in a move which has angered many of their supporters.

In a tweet posted earlier today, anti-Islam activist Hopkins shared a photo of her in the home of Shakeel Afsar and alongside Amir Ahmed, who have both voraciously led protests challenging LGBT equality education at Anderton Park Primary School in the city.

So gracious of @shakeelafsar7, and his family to invite me into their home, during their Eid celebrations – to discuss the issues with LGBT teaching at #AndertonParkPrimarySchool

Writer and broadcaster Hopkins, who once stated “Islam disgusts me” but defended her views as “entirely rational”, thanked Afsar for inviting her into his home for “Eid celebrations” and to “discuss the issues with LGBT teaching at Anderton Park Primary School”.

It appears the 44-year-old media personality – who in 2017 was reported to the Metropolitan police for a tweet in which she called for a “final solution” as part of a longer anti-Muslim tirade – was in the Sparkhill and Balsall Heath area to report on the recent protest ban, as she earlier tweeted a photo of herself standing outside the school.

A temporary council injunction has currently been placed around the school banning protests, but the protesters have vowed to continue.

The tweeted photograph, which captures a smiling Hopkins alongside an equally happy Afsar and Ahmed, has angered many of the chief protester’s supporters and critics alike. A number of individuals took to social media to trash the alliance, claiming joining forces with a known “Islamophobe” was a step too far.

Although Hopkins has always maintained she is neither Islamophobic or racist, she has routinely attacked Muslims and Islam, calling for a burqa ban, goading Muslims with photos of ISIS-themed cakes during Ramadan, claiming people were more violent while fasting during Ramadan, has labelled Islamic culture as “homophobic”,  and described Muslim ‘no-go zones’ as being run by “Muslim mafia”.

Here at Anderton Park Primary School – centre of the Muslim parent protest against LGBT lessons in school for 4 year olds.

An injunction has now been placed against the protestors.

They say they will be back here to protest on Friday.

Officially against multiculturalism, Hopkins also described refugees and migrants fleeing war zones as “cockroaches” and a “plague of feral humans” who should be stopped using “gunships” in a column featured in The Sun in 2015.  The UN’s human rights chief Zeid Ra’ad Al Hussein attacked the Sun newspaper for publishing Hopkin’s piece, branding her use of the word “cockroaches” to describe migrants as reminiscent of anti-Semitic Nazi propaganda.

She has also been criticised for attacking the trans community on a number of occasions, including mocking the Transgender Day of Remembrance.

Last year, she tweeted: “Anyone else sick of the sight of trans? You can’t move without trans being shoved in your face”, and recently described LGBT education as “indoctrination”.

In light of Hopkin’s very public views on Muslims, migrants and LGBT+ individuals, Shakeel Afsar hosted her in his home and welcomed her support. Afsar and Amir Ahmed continue to maintain they are not homophobic.

Afsar wrote online: “We as a community will Remain Tolerant of ANYONE even if we Totallt [sic] Disagree & we will Learn to CO EXSIST. Shame We cannot say the same about @BrumLeader”, a reference to Birmingham City Council leader Ian Ward, implying Ward isn’t as tolerant as Katie Hopkins.

In a further comparison, Afsar described Hopkins as “tolerant and respectful” in contrast to councillors Ian Ward, Kerry Jenkins and Waseem Zaffar; who he branded “lost souls”.

We as a community will Remain Tolerant of ANYONE even if we Totallt Disagree & we will Learn to CO EXSIST. Shame We cannot say the same about @BrumLeader @JaneRockHouse & @birmingham_live https://t.co/7c5ifiMRt7

Afsar has openly criticised Anderton Park School’s headteacher Sarah-Hewitt Clarkson about her approach in the teaching of the Equality Act 2010. While he has no children in the school, he claims he is defending his sister’s children who do attend Anderton Primary.

Leading almost daily ‘parent protests’ outside the school for several months, Afsar has been joined by Amir Ahmed, who orchestrated similar protests outside Parkfield Community School in nearby Saltley earlier in the year.

Their main concerns have been the teaching of LGBT equality as part of the Equality Act, which includes lessons on protected characteristics such as disability, race, religion and sexual orientation. However, claims of “sexualising children” have been criticised by education officials, who have rebuffed suggestions from some parents that their children are being taught inappropriate and mature themes about LGBT relationships.

Schemes such as ‘No Outsiders’ have been judged to be age-appropriate by education department Ofsted, who defended the materials being used in Parkfield primary school. While at Anderton Park School, where ‘No Outsiders’ isn’t taught, protesters are challenging the very inclusion of LGBT equality education.

Despite confusion, exaggerated claims and conspiracy theories, staff at Anderton Park have repeatedly insisted they are complying with government recommendations for teaching pupils about different types of families, including those with same sex parents, presented to children through age-appropriate story books.

Public response to the Katie Hopkins and Shakeel Afsar alliance:

This alliance of forces between Afsar and Hopkins has bemused many observers, generating anger and frustration for others. Supporters of LGBT+ rights and community cohesion have suggested the narrative of Muslims Vs the LGBT+ community plays into the hands of far-right exploitation.

“Oppressed groups are not exempt from the far-right or populism. In fact, since inherent within them is a sense of powerlessness or disenfranchisement, it makes them more attractive.

“That’s why we formed LGBT+ Against Islamophobia, because the far right and populists aligned with LGBT racists (yes, we called them what they were) to attack Muslims. Doing it didn’t make those that did Muslim or endorse religion as a way of life, but it was the right thing to do. It was unconditional and it was unequivocal.

“Of course we got abuse for it. Of course we caused an argument. People accused is of all sorts of things. But it was a necessary argument in the labour movement and made it stronger. The anti-racist/fascist movement was stronger for it, the LGBT people are stronger for It, the left is stronger for it and it also meant that this situation today has not escalated.

“I hope people do the same about homophobia and transphobia. It doesn’t mean people have to change their faith or their beliefs or even have legitimate questions over LGBT education. However, I can categorically say most of the information circulating about LGBT people or relationships education has been a pack of lies. People should know better and it’s time to put a stop to this.

“All it takes for evil to triumph is for good people to say nothing.

“The left and labour movement must be organised and vigilant in every community. Not taking a firm stand against LGBT phobia is a mistake as is not opposing those that seek to divide us. No-one from outside a community under siege can do it. But they won’t be alone if they do.

“It’s time to bring our communities together to make a stand against those who would ultimately take all our rights away, in doing so we might have to argue with our friends, educate each other, correct any necessary mistakes and move forward together.

“Today thousands marched in London against Trump. We know what Hopkins, Farage, the EDL and Boris mean for us all.

“Birmingham is better than this.”

“What an unlikely partnership. Shakeel ‘I’m not homophobic’ Afsar with Katie ‘Islam disgusts me’ Hopkins”

Solicitor Nazir Afzal OBE, who has been mediating between the school and concerned parents, wrote:

“Shockingly, the 2 non-parent protestors (I warned about) in the LGBT in schools matter invited Katie Hopkins to join them in their action I said nefarious forces were hijacking protest – but involving 1 of biggest Muslim haters is just disgusting This was never about the kids!”

I’m sorry but I didn’t expect you @shakeelafsar7 to sink further into that hole you created but then to invite the same racist lady who had created so much hatred for the Muslim community is ridiculous. I’m so ashamed to think you are part of the same faith I follow! #Disgrace https://t.co/K6evGBEaH9

Shockingly, the 2 non-parent protestors (I warned about) in the LGBT in schools matter invited Katie Hopkins to join them in their action

This was never about the kids! pic.twitter.com/Vx1rFV1lze

Seriously, Shakeel. Katie is beyond redemption and is using you as a pawn. Don't ally with the intolerant to fight intolerance – doesn't work that way.

this is a woman who called migrants cockroaches. who posted a video 2 days ago trying to generate anti-Islam panic. who posed outside that primary school THIS MORNING trying to provoke anti-Islam sentiment. how fucking stupid can you be??

As a Muslim, as a parent, and as a British citizen I find this appalling.. You are willing to work with someone who clearly and repeatedly insults minorities, to achieve what?
I am not sure what point you are trying to make, but whatever it is, you are wrong! Shame on you…

I can’t believe you let her into your home pic.twitter.com/OhH2uOYOor

Also you can never claim that you’re against islamophobia ever again when you’ve welcomed a woman into your home on eid who on a daily basis advocates for our removal or our death. The homophobia has truly made you lose all sense.

What an unlikely partnership

You honestly call what you have been doing peaceful? Are you kidding me? And then to meet Katie Hopkins.. are you losing your mind completely?