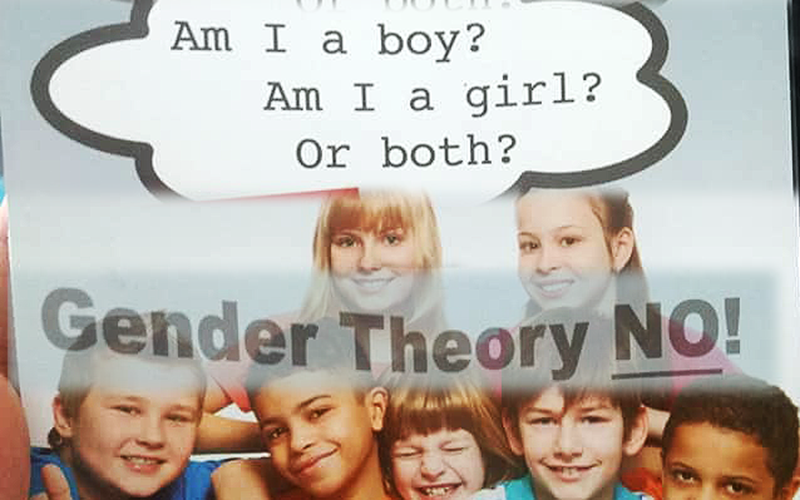 Offensive and "homophobic" leaflets have been delivered to homes in Birmingham (Photo: Mohammed M)

“Homophobic” and “transphobic” leaflets targeting Birmingham residents have been met with anger as hundreds of them have been delivered to homes across the city.

Published by the British wing of a conservative US Christian group, the pamphlets from organisation ‘Tradition, Family, Property’ describe gender theory as “totalitarianism” and describe the LGBTQ+ community as “anti-God”.

Many of the printed leaflets were delivered to homes in predominantly Muslim areas in Birmingham, believed to be exploiting controversy around recent anti-LGBT protests at several city schools.

Leading with the heading “Gender Theory: Diveristy or 21st Century Totalitarianism?”, the leaflets are vehemently against gender theory, describing it as a “delirious ideology claiming everyone can fancy themselves as man, woman, neither or both at the same” according to “mere whims”.

The material, distributed by a fundamentalist Catholic project, also claims: “Sophisticated activists are already at work to impose their anti-Christian and anti-God views on your children at school.”

The leaflet, which quotes the Bible, also offers a 64-page booklet for £5 which it claims will offer the ‘truth’ about issues relating to the LGBTQ+ community.

Residents who received the leaflets were quick to dismiss them, describing their messages as “homophobic” and “transphobic propaganda”.

“From an organisation that describes itself as instilling ‘Christian Values’, the argument that discussing something like gender is indoctrination is at best tone deaf, at worst hypocrisy.

“This is an active attempt at silencing trans children, who are acutely affected by such shameful propaganda.

“What these leaflets are saying is ‘Let boys be boys and let girls be girls’, but don’t be fooled by their choice of words. People, including children, are taught – and when they do not consciously want to, are forced to conform to socially impositioned gender roles. This isn’t about ‘protecting  children.

“It’s about attacking Trans people, and by extension all queer people.”

Who are Tradition, Family and Property?

Founded in Brazil in 1960 by Prof. Plinio Corrêa de Oliveira, ‘Tradition, Family and Property’ promotes an extreme version of Catholicism and stands against LGBTQ+ rights and challenges abortion rights for women. It was set up in the USA in 1971 where it has an established base.

Also using the names ‘America Needs Fatima’ and ‘Britain Needs Fatima’, the US body describes itself as “an organisation of lay Catholic Americans concerned about the moral crisis shaking the remnants of Christian civilisation”.

The TFP association does not seem to have a prominent British chapter, though the UK post office box address leads to an address in Glasgow.

The UK website is devoid of any content except a homepage graphic montage displaying photographs of the group along with a description stating:

“We are a civic association of Catholics , founded in 1989, the defend and promote the Christian values of tradition, family and the principle of private property. We have sister associations in 20 countries around the world.”

The site, which has a Philip Moran listed as its director, also claims its goal is to “build a Christian civilisation out of the ruins of the modern world as the medieval work arose from the ruins of the Roman world.”

(Visited 1,427 times, 1 visits today)
https://www.iambirmingham.co.uk/2019/08/23/anger-homophobic-transphobic-leaflets-target-birmingham-homes/https://www.iambirmingham.co.uk/wp-content/uploads/2019/08/TFP-leaflet-homophobic-in-Birmingham-crop-800x500.pnghttps://www.iambirmingham.co.uk/wp-content/uploads/2019/08/TFP-leaflet-homophobic-in-Birmingham-crop-300x188.png2019-08-23T19:50:21+00:00Staff ReporterCommunityFaithInvestigativeLGBT+NewsWorldAmerica Needs Fatima,American,Bible,Britain Needs Fatima,Catholic,Christian,Conservative Christian,extremist,flyers,fundamentalist,homophobe,Homophobia,homophobic,leaflets,LGBT,LGBTQ,Literature,Mumit,Mumit M,TFP,Tradition Family and Property,Tradition Family Property,US,US Christian group'Homophobic' and 'transphobic' leaflets targeting Birmingham residents have been met with anger as hundreds of them have been delivered to homes across the city. Published by the British wing of a conservative US Christian group, the pamphlets from organisation 'Tradition, Family, Property' describe gender theory as 'totalitarianism' and describe the LGBTQ+...Staff ReporterStaff Reporter[email protected]AdministratorI Am Birmingham
« Comedians Guz Khan and Sara Pascoe to lead 25th anniversary celebrations for Glee Club
The Peaky Blinders fan art that’s been turned into a national poster campaign »