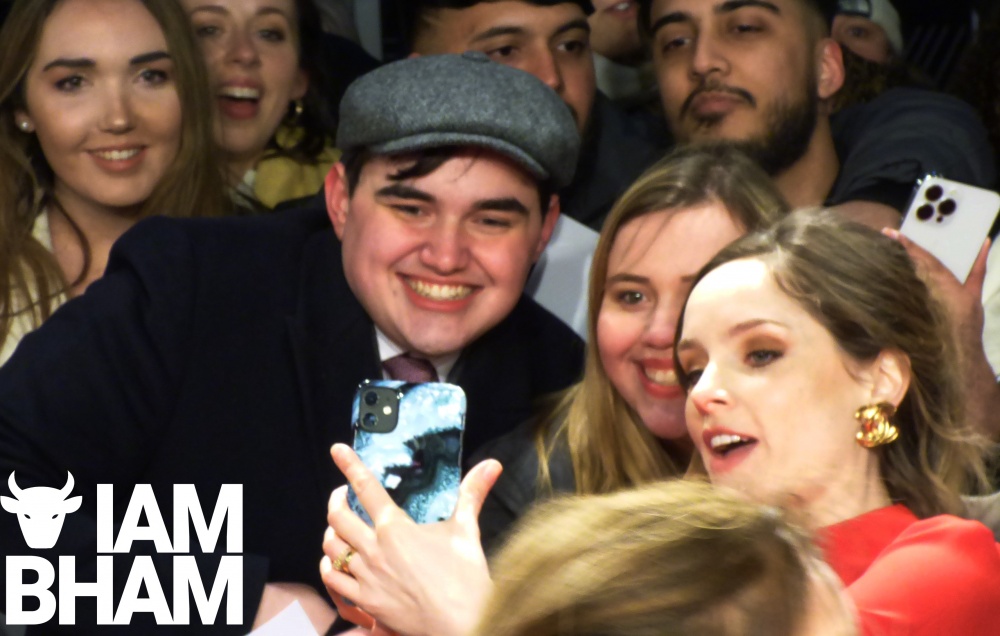 Hundreds of fans turned out for the red carpet premiere of the final series of Peaky Blinders in Broad Street, Birmingham.

Fans of the show braved freezing temperatures on Thursday night (24 February) to be dazzled by glitz and glamour as stars of the show strutted down the red carpet.

Cineworld in Broad Street, which has hosted the red carpet event for the Peaky Blinders several times previously, was the location for tonight’s premiere screening of the first episode of the final series of the hugely popular BBC show.

Hundreds of fans – including one from Ukraine – lined the streets tonight hoping to catch a glimpse of the stars as they arrived for the special red carpet event.

This is the sixth and final series of Peaky Blinders and the BBC’s red carpet premieres in Birmingham have become unmissable events over the years. Fans turn out in their droves dressed in flat caps and their 1920s finest to cheer on the stars of the show.

The Brummie gangster show – set in Small Heath – has become a huge global hit since first being broadcast in September 2013, with fashion and hairstyles related to key characters inspiring fans across the world.

For its final season, the show returns with faces old and new; with leads Cillian Murphy, Paul Anderson, Sophie Rundle and Ned Dennehy forming part of the stellar cast.

Peaky Blinders has put Birmingham, and the Brummies that have inspired the iconic Shelby family, firmly on the global map.

As the show returns for its final season – which starts this Sunday – fans were treated to a red carpet spectacular which took place in the heart of Birmingham.

Ahead of tonight’s premiere, there was a free ticket ballot by the BBC which offered 300 lucky fans the chance of attending the premiere, watching the stars arrive on the red carpet, and then attending a screening of the first episode of the new series.

It was reported by the BBC that over 50,000 people applied to be in with a chance of getting one of the fabled 300 tickets.

The lucky 300 were treated to a red carpet event which included Peaky Blinders cast members mingling with television personalities and sports figures walking along the red carpet on Bishopgate Street.

Writer Steven Knight led the cast and crew of the show down the red carpet. There was a long string of Peaky Blinders stars who chatted and posed for pictures with adoring fans.

Former Olympian Denise Lewis glowed and smiled as she spoke to people and waved to the crowds. BBC Asian Network presenter Noreen Khan braved the elements to wear a beautiful evening dress.

Dan Lee, the MasterChef the Professionals Champion 2021, was also spotted on the red carpet as was Michelin star chef Glynn Purnell who hails from Chelmsley Wood.

Sadly, there was no sign of actor Cillian Murphy – who plays the role of Tommy Shelby – due to filming commitments in America. Steven Knight said that Murphy was in Mexico working on a film called ‘Oppenheimer’ which is being helmed by British director Christopher Nolan.

Fans also missed the beautiful and strong Helen McCrory who tragically passed away last year. Her role as Aunt Polly was significant and fans of the show will be waiting anxiously to see how things pan out in the final series.

Originally broadcast on BBC Two, the last two series of the show were moved to BBC One in the UK, while Netflix acquired exclusive US distribution rights in 2014 and also stream the drama on their UK platform.

The BAFTA award-winning drama is an international phenomenon. Millions of viewers worldwide are hooked on the story of the notorious Shelby family’s rise to prominence and power, against the backdrop of working class, post-First World War Birmingham.

Thankfully, despite the freezing temperature, there was no rain during the red carpet event unlike last week when show creator Steven Knight and street artist Akse were in Digbeth to unveil a huge mural to launch the final series of Peaky Blinders.

The unveiling of the gigantic mural – which measures 42ft in height – was carried out on a cloudy and wet morning with rain lashing down in torrents.

The larger-than-life artwork was commissioned by the BBC to both celebrate and herald the broadcast date of the highly anticipated show which comes to a close after nine years since the first episode was aired.

Knight confirmed that despite the TV show coming to a close he plans to shoot a Peaky Blinders feature film in Birmingham in a new studio which will be built Digbeth.

The first episode of Peaky Blinders series 6 will air on BBC One at 9pm on Sunday 27 February.