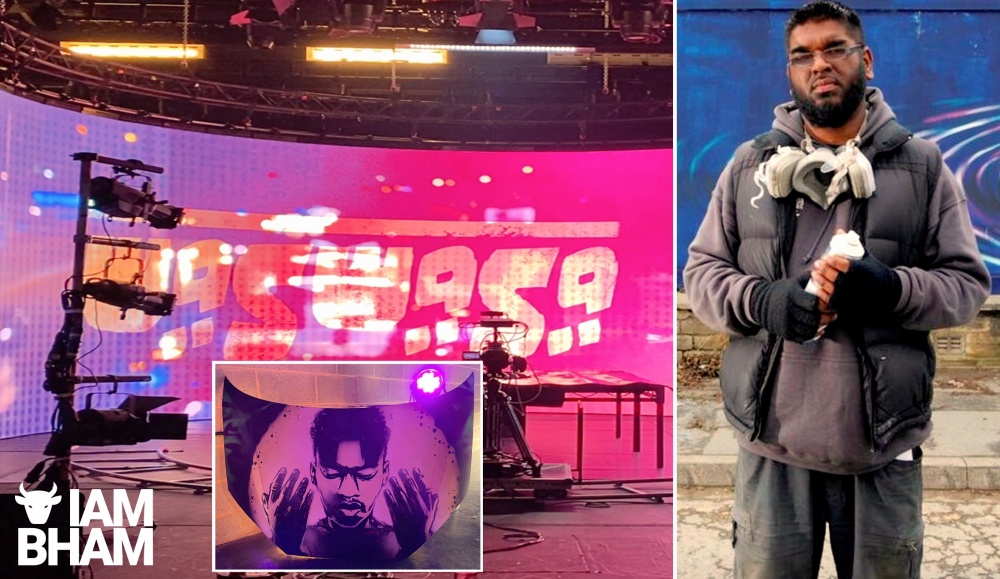 A Birmingham artist is putting together a spiritual show which will be unveiled at The Hippodrome as part of the Birmingham 2022 Festival.

Award-winning artist Mohammed Ali, who hails from Sparkbrook, is gearing up for what he hopes will be a memorable theatrical experience which will educate, inspire and unite the diverse communities of Birmingham.

Waswasa – Whispers in Prayer is an intimate and immersive theatrical experience by artist Mohammed Ali that explores the act of Islamic prayer and what that means in a secular society where Muslims are often marginalised and viewed with suspicion and fear – and even hostility and violence – as Islamophobic hate crimes continue to rise nationwide.

The physical act of prayer now extends beyond mosques to places such as parks and other public areas such as city-squares, and the sight of a Muslim engaged in devotion has become a part of everyday life.

In the world of popular sports such as football or boxing the audience is now accustomed to the sight of Muslim athletes prostrating to the ground or raising their palms to the sky in supplication during moments of triumph.

Ali, who has hosted numerous events and shows – including the highly-acclaimed Knights of the Raj exhibition at the Birmingham Museum and Art Gallery – said this new show about Islamic prayer is very close to his heart: “How does the nation perceive the act of Islamic prayer? It’s something I’ve been wanting to explore for some time.

“The physical and often very visible, public form of worship. It’s polarised society and created divides we know exist but don’t wish to speak of, whether it’s in the playground, in the gym or the workplace.

“This is, by far, the biggest show I’ll have done to-date.  This one is serious.”

The audience who attend the special show at The Hippodrome will be invited to walk through a combination of live performance, art installation and projected film zones that disrupt the conventions of theatre, placing them at the very heart of the spiritual journey.

Artist and organiser of the event Ali is aiming to demystify the familiar, yet largely misunderstood, tradition of Islamic prayer through an extraordinary multi-faceted show that will challenge the perceptions of the audience.

Ali hopes this unique theatrical experience will offer insights to non-Muslims and remove stereotypes or prejudices surrounding the act of Islamic prayer and allow people to focus and home in on the act of prayer itself and reach a deeper, and more philosophical, understanding of the process which will inspire love and unity.

The show will use delicate sound and lighting, recitation, calligraphy and music to open up the mind of the audience to the soothing art of Islamic prayer.

The Arabic word Waswasa is the concept of distractions that can invade the mind of a worshipper whilst praying.

Ali believes that in the modern world the distractions to the human mind come in many shapes and forms, including electronic devices, which keep humans continually “wired and charged up” at all times which reduces the elements of inner peace and serenity.

This constant state of being “logged” into other mediums and hemispheres has the potential to usher in mental health and social problems and cause harmful upheaval to an individual’s tranquillity and equilibrium.

The special show will also have a replica copy of the world famous Birmingham Qu’ran manuscript which is thought to be one of the oldest existing manuscripts in existence.

The Waswasa show will open at The Hippodrome on Thursday 25 August and run for a week with audiences having an option to select which portion of the show they want to sample.

The theatrical experience will also include an installation of Islamic prayer mats recently decorated by the local community – including refugees from various parts of the world – which were painted during workshops conducted at a new creative space in Sparkbrook.

Speaking about the new arts space, Ali said: “Whilst the new space we have created aesthetically feels like a sheesha bar or even a nightclub, social consciousness and spirituality is at the heart with even a space for prayer amidst the neon lights.

“Something alternative is needed amidst the urban chaos of the cities we live in.

“We first experimented with such a space 12 years ago – a run down space in inner-city Birmingham transformed into a creative oasis. We now return with a much bigger warehouse space.

“I’ve been looking long and hard for the right space in Sparkbrook as it’s the place where I was born and where my late parents settled in the 60’s as immigrants. Honouring their legacy and continuing the fight to build spaces for us to gather and grow with strength.”

Ahead of the Waswasa show at The Hippodrome, Ali is also staging a special gathering at the new arts base in Sparkbrook on Thursday 30th June at 6pm.

Ali shared some details about next week’s event: “I am really excited to be gathering with people once again after such testing times.

“As you may know, Soul City Arts is an organisation I lead, and we are excited to have been commissioned by Birmingham 2022 Festival to deliver a major show entitled ‘Waswasa’.

“We have recently taken over a large warehouse space and turned into our creative base for the production of this show as well as delivery of regular community events.

“I was keen to ensure our space was placed right amidst the community, away from the typical places where we expect to find art spaces.

“I’ve been looking long and hard to find a base embedded in Sparkbrook, as it is where I was born and where my family first settled in the 1960’s, as well as being the organisation’s historic home in previous years.

“I am excited to return to the community with a 4000 square-feet space which we have transformed from industrial unit to creative oasis. This is an opportunity for us to network and reconnect with others over soft-drinks and light snacks provided by our friends at the Raja Monkey Cafe.

“I will be sharing more about the ‘Waswasa’ project – a show taking place at The Hippodrome, that aims to explore the concept of Islamic prayer in modern Britain.

“I will also be sharing some of our wider visions as well as inviting guests to speak from community members to leaders of our city. ”

Ali also added that the arts base in Sparkbrook – which hosts weekly workshops, events, and community sessions – is open to everyone regardless of race, age, gender or faith.

He said: “Our weekly events as part of the Waswasa build up has featured a cross section of Birmingham’s communities.

“We have had young and old, Muslim and non-Muslim, religious and non-religious, academics and students, councillors and refugees. All gathering in our newly established warehouse space to experience art, discuss, dine together and share thoughts and prayers.”

At a time when there is so much division in society, with intense scrutiny placed on outsiders and ethnic minorities, it is quite refreshing to see art, music and theatre being used to heal and unite communities. Ali’s art space in Sparkbrook, and the Waswasa project, seem to have the perfect ingredients to bring people together under a united banner of a shared humanity where people can safely and freely exchange ideas.