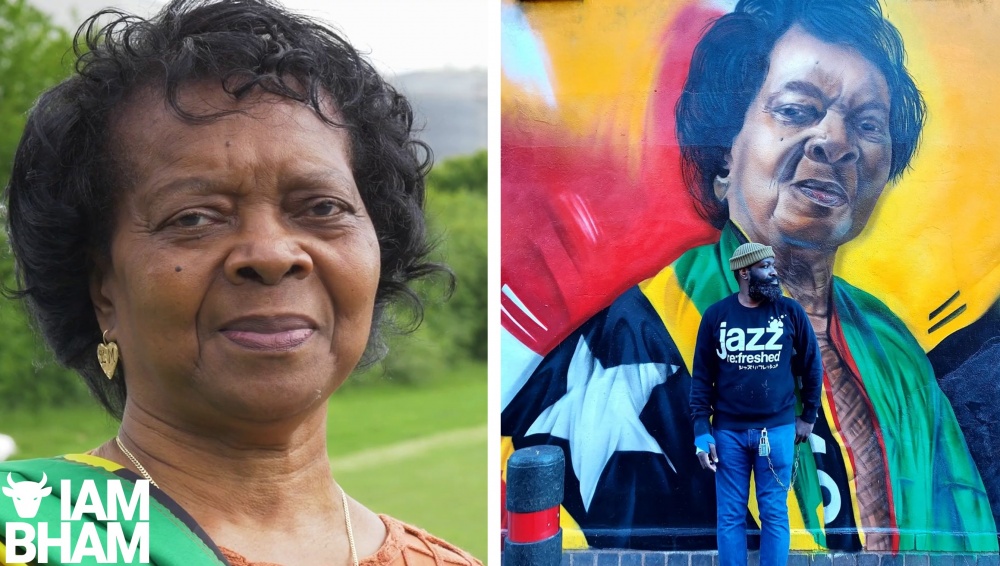 A striking new mural has been painted in Erdington celebrating one of the migrant women featured in the Queens of the Commonwealth documentary.

The gigantic art, painted by Bunny Bread, is a beautiful portrait of former NHS nurse Louvina Moses who migrated to Great Britain from St. Kitts in 1961.

The colourful street art appears on a wall on the corner of Coton Lane in Erdington, and it took artist Bunny Bread – known as Create Not Destroy – several days of painstaking painting to produce the vivid looking mural in the area where he has lived for the past eight years.

Work on the large scale mural started on Wednesday 29 June and continued until Monday 4 July, with the artist returning a day later to finalise a few final touch ups.

The Erdington-based artist, who is also a designer and DJ, was commissioned by the Birmingham 2022 Festival to create portraits of 22 migrant women from Commonwealth nations who made the ultimate sacrifice of leaving their homes and loved ones to work and settle in the West Midlands.

Talking to I Am Birmingham about the mural project, Bunny said: “It’s been an absolute honour to once again shine a light on the people who made huge self-sacrifices to improve their lives and help others, and become the backbone and building blocks of institutions such as the NHS and the British public transport service.”

The monumental mural employs colours that reference the flag of St. Kitts – green, red, yellow, black and white. The colours merge and flow like the flag that is draped upon the shoulders of Louvina Moses.

The dynamic and bright flag seems to ripple and crease in the air. Louvina’s serene and majestic face gazes out from the art like a beloved grandmother who soothes away the pain, aches, worries and troubles of life.

On the top left of the mural the words “Queens of the Commonwealth, Louvina Moses, MBE, St. Kitts – Birmingham, 1961” have been painted, and on the top right of the wall a slogan – “Celebrating Communities” – bookends the artwork.

Survival, inequality, a fear of failure and a sense of duty, these are the themes that run through the lives of the 22 women who form a part of the Queens of Commonwealth project which highlights and celebrates the migrant women who helped to rebuild this nation.

Artist Bunny confirmed he produced 21 portraits of the inspirational women on canvas, and a mural of Louvina Moses on a public wall. He said he was drawn to choose Louvina for the mural because her face had the lines of an incredible untold story that “spoke” to the viewer in a sublime and subtle manner.

Bunny explained that while he was busy painting the mural, people from the diverse communities of Erdington would stop by and chat, and many of them were captivated by Louvina’s face and how her expression and natural grace seemed to evoke emotions in the bystanders.

The story of Louvina Moses is filled with grit, strength and resilience. In 1961 she made the heartbreaking decision to leave her home in Tabernacle Village in St. Kitts, say a tearful farewell to her two children aged 7 and 9, and respond to a call for workers to help rebuild Great Britain after World War II. She arrived to these shores and found work in the NHS as a nurse.

Speaking about her struggles, Louvina said: “Leaving my mother, my family was heartbreaking, but leaving my two children behind was even worse.

“They didn’t recognise me as their mother when they eventually arrived in England and referred to my mother as theirs.”

Louvina suffered the horrors of racism whilst working in the NHS for 43 years but she never caved in or gave up. She found the inner strength to continue with optimism with an outlook that embraced all humanity regardless of race.

“The problem that most black people suffered when they came here? Racism,” reveals Louvina.

Her work ethic, her personal sacrifices, and her passion for helping others, led her to becoming one of the most respected nurses in the country.

Her astonishing contribution to the country was recognised by the Queen and she was invited to Buckingham Palace to receive an MBE.

Talking about her meeting with the British monarch, Louvina said: “My grandmother would have been proud to hear that me, a poor person like me, reached Buckingham Palace.

“Because if you’re a poor person back home, you wouldn’t think that you will be invited to Buckingham Palace. You never think you’ll get to the gates of Buckingham Palace, let alone to go inside. ”

One of the aims of the new mural is to get people to discover, remember, and celebrate some of the forgotten heroes of the city whose stories are rarely heard, seen or shared.

The important contribution made by ethnic minority communities, including migrants, refugees, immigrants and asylum seekers are often left in the footnotes of history, or worse still, erased.

The documentary (produced and directed by Panikos Panayiotou of LGK Productions Ltd, and created by a team of Birmingham producers and researchers) – and the portraits and mural that accompanies the Queens of the Commonwealth project – hopes to address this issue.

Artist Bunny – who previously painted a public art trail of 10 murals in Lozells and a powerful inclusivity mural of a Muslim girl on a skateboard – hopes the mural of Louvina Moses will raise awareness about forgotten history, and inspire communities to build bridges of communication, with the art acting as a catalyst for dialogue that ushers in positive change that removes fear and suspicion of outsiders.