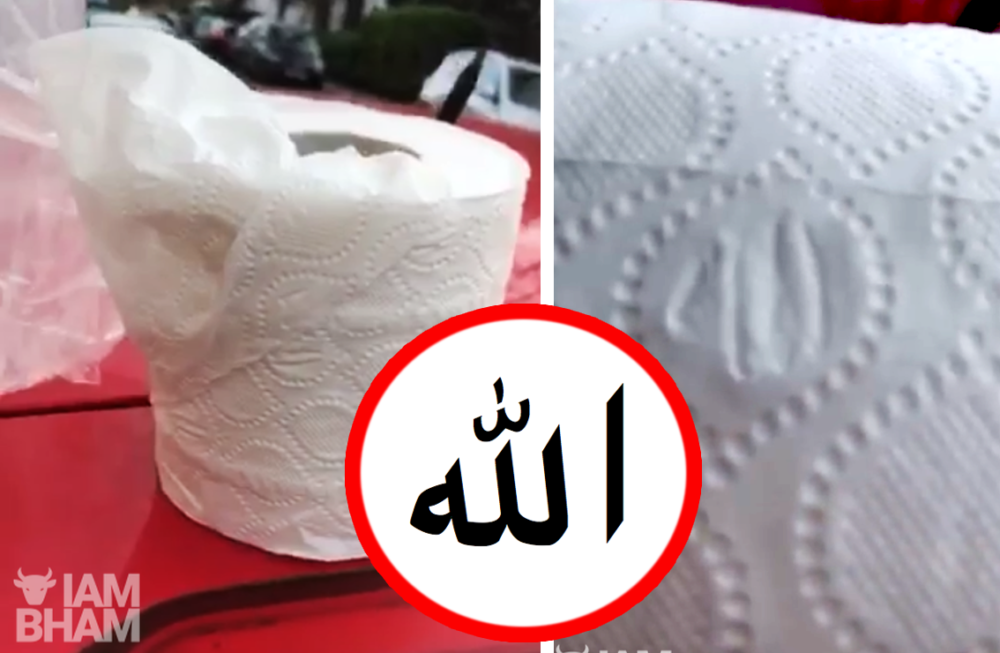 There have been calls for a Marks & Spencer boycott following the alleged discovery of the word “Allah” on the supermarket’s own brand toilet paper.

In a video circulating on social media, a unidentified man – who is believed to be Muslim – urges fellow followers of the faith to halt shopping at the high street retailer and to boycott the brand after displaying toilet paper that he claims bears the name of God in Arabic.

On closer inspection, the loo roll does indeed have an imprint design repeated throughout its 3-ply sheets which loosely resembles the Arabic script for the word “Allah”, but it isn’t clear if this is just a coincidence or deliberate malice during the manufacturing process.

Speaking over the short video while filming, the seemingly offended man states:

“Recently I bought toilet tissue from Marks & Spencer and subhan’Allah (Glory to God) when I opened one of them, it has the name of Allah, as you can see.

“So please brothers and sisters, prevent yourselves from buying this toilet tissue, or try to boycott Marks & Spencers, insha’Allah (God willing) because every toilet tissue has the name of Allah on it.”

Although the source of the video is unknown, the specific brand of toilet paper referenced is available to buy via the Marks & Spencer website, and priced at £2.50 for 4 rolls. The tissue paper is 3-ply with “aloe vera soothing lotion”.

While the man’s plea may be well-natured as a defence of faith, it may also be a simple coincidence that the toilet paper design resembles a word so common to millions of Muslims around the world.

It wouldn’t be the first time a major company has fallen foul of unintentionally adopting Islamic script on popular products.

In 1997, Nike withdrew 38,000 pairs of the sports shoes carrying a logo that offended Muslims in America and agreed not to sell the new range in Britain, after the company used a logo meant to look like flames on a line of basketball shoes that the Council on American- Islamic Relations (CAIR) claimed resembled the word “Allah” written in Arabic script.

In January last year, clothing store H&M pulled a range of socks from shelves after customers complained a part of the pattern looks like the Arabic word for Allah written upside down.

Then only a week ago, giant global online retailer Amazon announced its decision to withdraw a selection of products featuring Islamic scripture from its site following a request from an American-Muslim civil rights group. The controversial products included toilet seat covers adorned with Islamic iconography.

UPDATE: Marks and Spencer have responded to these claims. Read their statement here.

(Visited 39,818 times, 1 visits today)
https://www.iambirmingham.co.uk/2019/01/19/calls-ms-boycott-following-discovery-allah-toilet-paper/https://www.iambirmingham.co.uk/wp-content/uploads/2019/01/M-and-S-Allah-toilet-paper-06-800x522.pnghttps://www.iambirmingham.co.uk/wp-content/uploads/2019/01/M-and-S-Allah-toilet-paper-06-300x196.png2019-01-19T21:20:32+00:00Staff ReporterBrumFeedBusinessFaithNewsRetailAllah,Amazon,Arabic,boycott,controversy,H&M,Islamic,loo roll,M&S Marks & Spencer,Marks and Spencer,name of Allah,Nike,offend,offended,offensive,online,product,Retail,retailer,script,scripture,Social Media,Store,supermarket,toilet paper,toilet roll,toilet tissue,Viral Video,WhatsApp,wordThere have been calls for a Marks & Spencer boycott following the alleged discovery of the word 'Allah' on the supermarket's own brand toilet paper. In a video circulating on social media, a unidentified man - who is believed to be Muslim - urges fellow followers of the faith to halt...Staff ReporterStaff Reporter[email protected]AdministratorI Am Birmingham
« Mother’s anger as 5-year-old son banned from school for “extreme” haircut
David Beckham gets Peaky Blinders set tour as filming on Series 5 wraps up! »