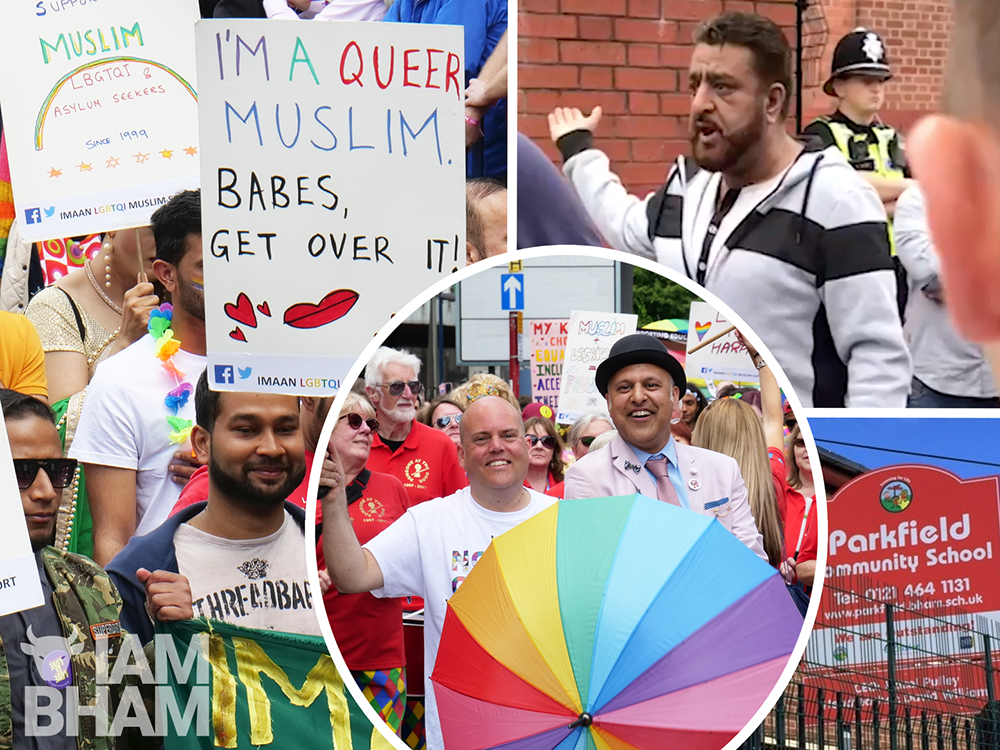 Parent protests against LGBT+ inclusive education have resumed outside Parkfield Primary School in Birmingham (Image: I Am Birmingham)

In response to Parkfield Community School in Birmingham announcing that it will be restarting a modified version of equality lessons programme ‘No Outsiders’ this autumn, protesters against the LGBT-inclusive lessons have re-instigated demonstrations outside the school.

Despite the programme being modified following a consultation with parents – now renamed ‘No Outsiders For A Faith Community’ – a group of parents of children at the school have hit out at the amended version and have restarted protests, with a determination to continue the action for the weeks and months ahead.

According to a spokesperson for the school in Saltley, the new version of the educational materials acknowledge and respect “the concerns and sensitivity expressed by some parents” and will, as before, include lessons referencing race, religion, age, gender, gender reassignment, sexual orientation and disability.

“As a result of the consultation ‘No Outsiders for a Faith Community’ has been especially designed for Parkfield Community School acknowledging and respecting the concerns and sensitivity expressed by some parents in the present school community.”

“Our school ethos of equality and everyone being welcome remains a key aspect of our school.”

The programme’s creator Andrew Moffatt has said its aim was to introduce children to diversity in society and make them accept difference within the world today so that ‘everybody is welcome’. The aim of the programme is to find a way to teach children about the Equality Act 2010, developing an understanding of British values through an inclusive curriculum and school ethos.

“A key element of the No Outsiders ethos is engagement with parents from the start, in order to promote solid foundations of tolerance that are matched both in and outside the school gates.”

However, the Parkfield Parents Group claim they voted against the new version of the programme, stating:

“This is because it is well known that the original programme and now even the new programme is heavily biased towards LGBTQ, whereas an equality programme doesn’t need to be.”

Fatima Shah, who has a daughter in the school, said: “We just haven’t been listened to. We have said we don’t want children in reception to be shown books with same-sex relationships. It’s confusing for them.

“But the school has said it will do exactly the same as it was doing before but with a slightly different name. How is that taking our views into account?”

As protests resumed outside the school gates, an angry parent vented his frustrations to attending spectators and press, saying: “Don’t teach our children that gay is ok, because in Islam gay is not ok.

“But we have to tolerate it, we have no issues against the person who practices sodomy. Let him do it at home.”

The outburst comes after parents had originally removed 600 children from the school in March after initially discovering that assistant headteacher Andrew Moffatt’s ‘No Outsiders’ initiative was also an LGBT-inclusive awareness programme.

The school has refused to axe the programme which has caused outrage in the local predominantly Muslim community, but accusations of homophobia have also been levelled at some of parents who have displayed offensive homophobic banners during protests.

Community and local homelessness activist Javed Iqbal, 50, is helping to organise the protests and said: “I think it is disgusting. Children are having to suffer and witness these scenes at such a young age.”

Protests at another Birmingham school, Anderton Park Primary, recently ceased after a court injunction placed an exclusion zone around the school. However, one of the co-ordinators of the Parkfield protests, Amir Ahmed, has also been orchestrating protests at Parkfield Primary and was present during this week’s fresh demonstration despite having no children at either school.

Muslim LGBT campaigner Khakan Qureshi was disappointed with the resumption of protests, explaining:

“I had heard protests will re-start on Monday as consultation had “broken down” according to one of the parents. After some encouragement from members of SEEDS, the parent in question stated there will not be any protests taking place on Monday.  There was no mention of holding protests on another day. So, seeing members of the community take a stance today is a grave disappointment.

“My concern is to figure out what is the aim of the protests, as this issue has been going on for months now, and there seems to be no win-win solution in sight. To capitulate now, to the parents or protestors, sends out the wrong message and indicates the school is bowing down to bigotry, not equality.

“To enforce equality and diversity within the classroom is the way forward, especially since we know RSE will be mandatory in 2020.

“Above all, everyone has to consider the detrimental effect this has, not just on the school, parents, teachers and children within the community of Alum Rock but the overall impact on the wider community – the education system, religious teachings, LGBTIQ+ diaspora and the children, who are being torn between parental rights and consent, and the ethos of the Equality Act.”

‘No Outsiders‘, which is being taught at more than a hundred schools across England, has received widespread support from Birmingham City Council, Ofsted, a wide range of cross-party MPs, human rights groups, LGBT+ Muslim organisations and celebrities.

Nearly 70 MPs have also signed a letter to the Education Secretary, Damian Hinds, calling on the government to give clearer support to schools on teaching about same-sex relationships.