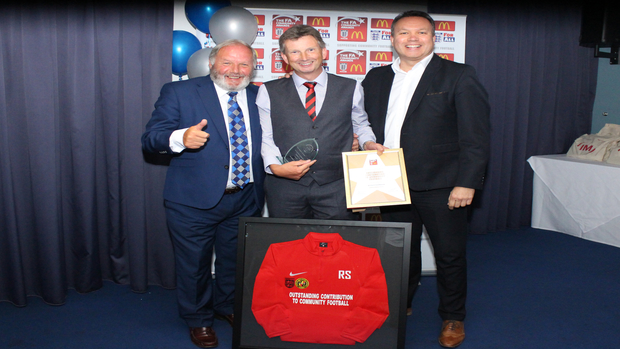 Recognising and rewarding the clubs, leagues and individuals that show incredible dedication for the benefit of grassroots football within the Birmingham region, the evening’s ceremony included the announcement of winners of this year’s local FA Community Awards, which came as the result of a lengthy public nomination window.

Hosted by BBC West Midlands’ Jenny Wilkes, over 100 volunteers were in attendance, representing a total of 18 clubs, leagues or football organisations from across Birmingham’s vast geographical region. Also in attendance to present awards to deserving winners were a number of names within the game with Birmingham connections, including former Aston Villa strikers Darius Vassell and Marlon Harewood, and Solihull Moors’ Darren Carter.

The evening also provided a platform to promote a fantastic local charity Smile for Joel, which was established in memory of Birmingham County FA referee and youth council chairman Joel Richards, who was tragically among the victims of the 2015 attack in Sousse, Tunisia. Joel’s mother, Suzy Owens, and his brother Owen were in attendance as special guests of the Birmingham FA.

Also in attendance was former Birmingham City manager Barry Fry, who presented the standout award on the evening – the Outstanding Contribution to Community Football accolade, which was awarded posthumously to the late Richard Seedhouse, who passed away in January, of Coundon Court Football Club.

Kevin Shoemake, Chief Executive Officer of Birmingham FA, said: “It was a fantastic evening which really highlighted the amazing people we have involved in the grassroots game around the region. We would like to thank Birmingham City for their support and fantastic hospitality, and local sponsors Irwin Mitchell and their guests for attending.

“Congratulations again to all the nominees and winners, they should be extremely proud of their achievements and the exceptional standards they set both locally and nationally.”

Marlon Harewood, former Aston Villa forward and now a director at AC13 Lifestyle, commented: “Thank you to my hosts Irwin Mitchell solicitors and Birmingham FA for a brilliant evening.

“I was honoured to hand-out an award for the Charter Standard League of the Year. I wish continued success to the Birmingham FA and the grassroots volunteers teams/staff involved. I look forward to next year’s awards ceremony!”

“To have our efforts recognised is a huge honour and the kind words spoken not just from The FA but from fellow nominees is something that we will treasure. To be part of such an amazing, well organized evening with such worthy nominees was a privilege”

The awards were held in partnership with national law firm Irwin Mitchell Solicitors, and supported by McDonald’s.