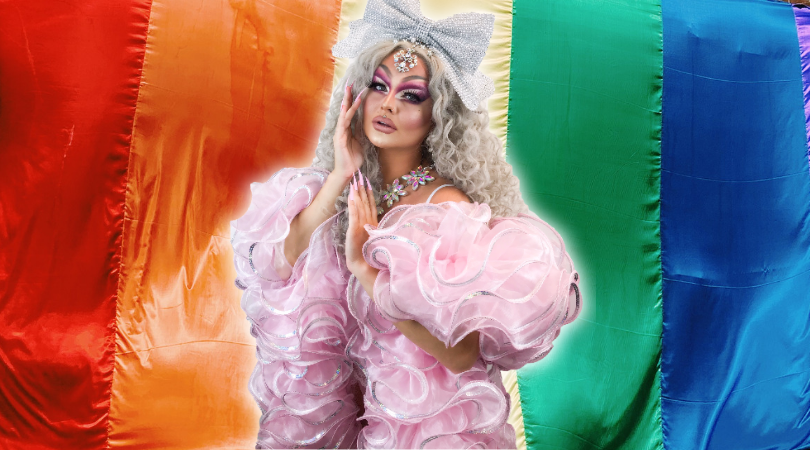 Drag Queen and Fantabulosa member, Lacey Lou is the founder of Glittershit; a community based club night aimed at fun, self-expression and, of course, lots of glitter. The event has since received national attention and has been named one of the country’s top LGBTQ+ attractions.

We caught up with the with the woman behind the event ahead of Birmingham Pride to find out about her glitter-filled journey.

What is the inspiration behind Lacey Lou?

I have so many inspirations for Lacey Lou; she’s an equality and freedom, warrior goddess. To me the most beautiful things come from the natural world with my biggest inspiration being flowers. I love the idea of Mother Nature being the strongest force and I see it as very feminine. Lacey Lou takes the feminine aspects of the world, including stereotypes, and makes them empowered and strong – the dominant force. I want to encourage other people to feel empowered by their femininity; we all have it in us.

What challenges do you face as a female Drag Queen?

Over the years I’ve faced some interesting challenges based on my gender, it’s been a rollercoaster of emotions. It’s been 6 years from when I first started, and I’ve learnt a lot of lessons through the experience. Many people do not understand the concept of none cis-men performing drag but I’ve learnt that through relaxed conversations, many people come on board! You do have to work a lot harder at times to receive the same validation but I think it’s made me a better artist.

There have been situations where I have had jobs taken from me, or not received jobs, based on my gender. Those times really hurt but then you try to remember that you don’t want to work with backward thinking companies like that anyway. Ultimately, I don’t care what anyone thinks. So long as I am putting out a positive character and role model that makes people feel good, that’s all I care about.

What inspired you to create the club event Glittersh*t?

When we first started Glitter Shit, there were no events like it and there was a need for it. The Birmingham scene was very young and white male focused but they were not the only ones within the community. We wanted a no-judgement area for people to get creative, feel comfortable and have an unpretentious night of pure bliss! Antony Collins and I popped some cash together, covered ourselves and glitter and went full steam ahead. Thank god it turned out a success!

We are so lucky to have been featured in the media and supported some fantastic artists through it. I am eternally grateful to The Glitter Shit family, the people who helped us start and those that came later, for all their help.

Where do you see it going in the future?

We’ve achieved some really fantastic things over the years that I had never planned, and I haven’t fully thought about its potential. We are at a cross roads with community and business and we are yet to decide which road to go down. Stay tuned: we will always be around no matter what direction, throwing glitter on everything!

What is the purpose of Fantabulosa?

When we started Fantabulosa last year, I don’t think any of us realised quite how much of an impact it would make. What started as a nice little pay check became a lot more to us all and to those we met through the show. It’s a fully choreographed and scripted drag show but for children so it’s age appropriate and thought out. To those that have seen the show and understand, it’s truly wonderful and perfect for teaching children of different family constructs inclusive of everyone.

It’s needed especially now more than ever as there has been protests starting in Birmingham and moving to other towns in regard to same sex relationships being taught in schools. Projects like Fantabulosa let children feel and see that they are included in societies narrative, whatever race, sexuality or religion. Teaching inclusivity and diversity at a young age is only ever a great thing for our future generations to be more accepting and respectful than we have been.

.
What is your favourite Birmingham Pride memory?

Gosh, so many amazing times I can’t pick one! I think my first pride where I got to be on The Nightingale float in the parade in drag is a proud moment for me. I had faced so many pushbacks from people for doing drag and the visions I had for the community’s inclusivity. Being asked to be on the float made me feel like I was going in the right direction.

Another great moment was meeting an idol of mine Mykki Blanco and seeing them perform live. I never thought I would get to meet such an innovator I adore in person; I was a mess of a fan girl.

What are you most looking forward to this Birmingham Pride?

This is the first year I won’t be there all weekend as I travel to a Fantabulosa show on Saturday evening. But it’s also a big event for me on the Saturday as I will be DJing for the first time with my event Lacey Lou’s Femme Palace which I’m really excited about. The femme palace is what it says on the tin, a space for shameless and empowered femme expression! It’s my first project on my own without the crutch of my friends, so nerve wrecking but exciting!

I’m looking forward to the acts on the Future Stage in Nightingale. It’s a fantastic area that brings you acts you would never have seen at Pride a few years ago. It’s truly ahead of its time. Lastly, the parade is always the best part, it’s pure magic of so many queer families coming together. Absolute magic.

Wow, a hard one to sum up! Pride to me is liberation, acceptance, freedom, celebration, diversity, inclusivity and so much love.

If you want to find out more about Lacey Lou, you can find her on Instagram or Twitter.

Know someone that deserves some recognition this Birmingham Pride? Amazing artist? Talented techie? Courageous community leader? Let us know!
Tweet us @IAmBirmingham with the hashtag #BrilliantBrummies, or email [email protected]